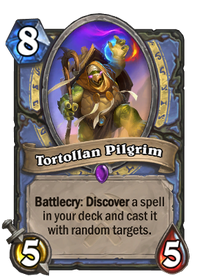 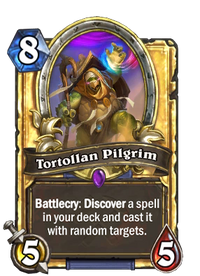 Battlecry: Discover a spell in your deck and cast it with random targets.

A tortollan made it to the desert!

Tortollan Pilgrim is an epic mage minion card, from the Saviors of Uldum set.

Tortollan Pilgrim acts as an additional use for your spells, as well as playing them for free, saving you some mana in most cases while putting out a bit of tempo from its body. It's best run in decks that don't run too many targeted spells and many high-cost spells to offset its cost like Blizzard, Power of Creation, and Puzzle Box of Yogg-Saron.

Potion of Illusion can be used to create a 1-mana copy of itself (and other allies). While a hefty tempo investment, you can use the 1-mana copy to play other huge spells later or use it to play your second Potion of Illusion to copy other minions whose stats aren't important to get more value or even combo with them.

Summon
You're in my hands now.
Attack
Goodness gracious!