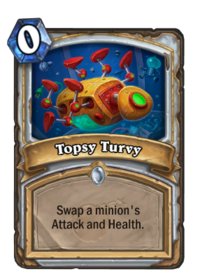 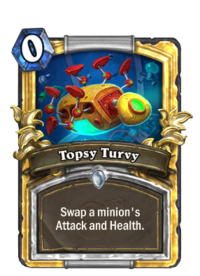 Swap a minion's Attack and Health.

Topsy Turvy is a common priest spell card, from The Boomsday Project set.

In the same vein as Inner Fire, Topsy Turvy is most commonly used as a finisher alongside multiple copies of Divine Spirit, with more flexibility than Inner Fire due to its 0 mana cost; this also allows it to dodge Skulking Geist. Its main disadvantage compared to Inner Fire is that it cannot be used for trading, as the affected minion will almost always end up with low health. It can also be used to remove stubborn low-attack minions, especially ones with 0 Attack like Doomsayer.

Topsy Turvy is a key card in the Test Subject OTK; for details, see the page for Test Subject.