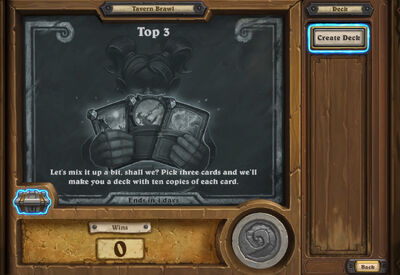 "Let's mix it up a bit, shall we? Pick three cards and we'll make you a deck with ten copies of each card."

This Brawl is a sequel to the earlier Top 2.

The second appearance of this Brawl was a stand-in for Brawliseum - Battle of the Bans, the debut of which was prevented by technical difficulties. After a short period during which players were unable to access Tavern Brawls, the latter Brawl was replaced with Top 3.

This Tavern Brawl sees players doing battle with custom decks composed solely of copies of three cards chosen by the player. Each deck includes precisely 10 copies of each chosen card. Players cannot include more than one copy of any card.

A huge variety of combinations are possible in this Brawl, some competitive, some just for fun. Some provide reliable but perhaps boring face damage, while other aim for unlikely but potentially spectacular payoffs. A number of decks are listed below, included some strong competitive choices and some fun alternatives.

These decks were used in older versions of the brawl, but have been rendered ineffective or unusable through nerfs. They are listed here for historical reasons.

Certain archetypes exist within various different combinations, often deciding in themselves the outcome of the match.