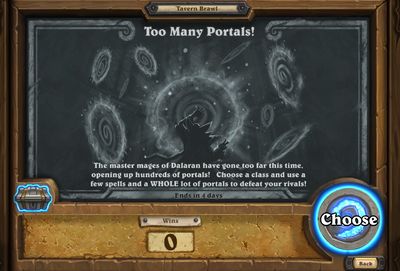 "The master mages of Dalaran have gone too far this time, opening up hundreds of portals! Choose a class and use a few spells and a WHOLE lot of portals to defeat your rivals!"

Additionally, Too Many Portals! was one of nine Tavern Brawls featured as part of the 100th Brawl, A Cavalcade of Brawls!. Its mechanics were used by, of course, the mage class.

This Tavern Brawl sees players doing battle with special pre-made decks, each teeming with Unstable Portals. Players can choose any class, with each match generating a unique deck filled with 7 randomly selected spells for that class, and 23 Unstable Portals.

The random nature of this Brawl makes it necessary to develop strategy on the fly, making versatility more valuable than preplanned combos. The randomness of the opponent's deck reinforces this, since it is not possible to predict what cards they will possess, or, to a large degree, put into play. The random selection of options often forces less than desirable plays, since the player is usually lacking ideal cards for the situation. This lack of stability is moderated somewhat by the fact that the opponent is suffering under the same conditions, but can lead to some extraordinary plays and strong swings during matches.

Mana Wyrm, Sorcerer's Apprentice and Archmage Antonidas are very valuable thanks to their synergy with spells, while Troggs (especially Troggzor the Earthinator) and Loatheb help to discourage your opponent from using Portals, potentially costing them significant momentum. On the other hand, Millhouse Manastorm is a suicidal play since it allows your opponent to play all spells in hand for free, granting them the opportunity to command significant board presence.

While it is entirely possible for all classes to achieve come-from-behind wins and consistent performance, several classes do deserve slightly more consideration. Any class that has access to draw options is worth considering, as it's possible to exhaust one's hand quickly if too many random minions are dropped, making it harder to mount a comeback. Mage benefits from having vital class spells for removing enemy minions, in addition to Arcane Intellect. Mirror Image can help to copy powerful minions but can be easily played around if the opponent has cheap minions in hand to trigger the secret. Effigy can also be a strong play since it uses the destroyed minion's original cost, providing even more value from a minion that cost 3 mana or more. 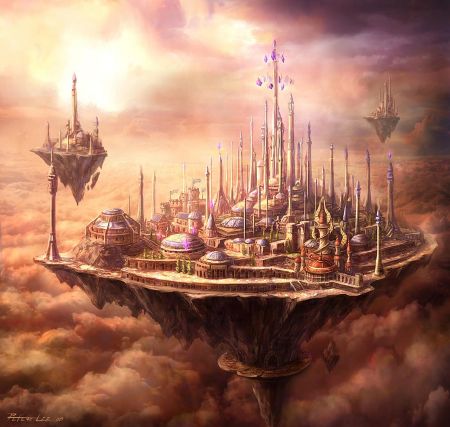 The floating city of Dalaran

Dalaran is a magical city and centre for arcane study. Previously permitting members of both factions within its walls, the city is now a stronghold of the Alliance. Previous leaders of Dalaran's high council, the Council of the Six, include Jaina Proudmoore, Rhonin and Archmage Antonidas.

With magic use widespread and well-honed, the city is known among adventurers for its variety of portals, allowing instantaneous travel to locations across Azeroth. According to this Brawl's description, this time the portal-openers of Dalaran have gone a little too far.

Dalaran was one of several kingdoms that emerged as the Empire of Arathor declined. Long ago, most human magicians lived in Strom. Many fledgling wizards left the restraining confines of Strom behind and traveled to Dalaran, where they hoped to use their new powers with greater freedom. Wanting a place more suited to extensive use and study of magic, they traveled north to the recently founded city of Dalaran, located in the Alterac Mountains region. There, these magicians used their skills to construct the enchanted spires of Dalaran and reveled in the pursuit of their studies. More wizards followed, and the city became a haven for magi and a center of arcane study. The citizens of Dalaran tolerated the magicians' endeavors and built up a bustling economy under the protection of their magic-using defenders. With the mages of Dalaran protecting non-magic using inhabitants with powerful protection spells, Dalaran became a decadent, extravagant paradise. Dalaran was also built atop a massive ley line.

The wizards's overuse of magic with no proper protection or regulation, though, acted as a beacon for the Burning Legion, luring them back to Azeroth. Demons slipped through the gaps in reality, terrorizing the locals until the ruling Magocrats were forced to turn to the elves for aid. High elf wizards quickly realized what had happened and warned that humanity would have to give up magic to subdue the threat completely. The Magocrats, unwilling to sacrifice their power, instead proposed selecting a mortal champion to protect them from the Legion. This Guardian would have access to all their might, and would form a secret defense for the world. The elves agreed and, through the newly formed Order of Tirisfal, provided guidance in the selection. At the same time, the Magocrats sent some of their number to research and catalog all human magic. These wizards became the Kirin Tor.

The Kirin Tor became the city’s ruling power. Dalaran, though not a large city, was a beautiful place of towering spires and glittering streets, and the people there were happy and well protected. The Kirin Tor’s headquarters was the Violet Citadel, an impressive building so named for its stone walls which gave off a faint violet light. The building had many libraries, research chambers, testing rooms, classrooms, meeting alcoves, and bedrooms.