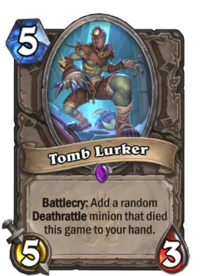 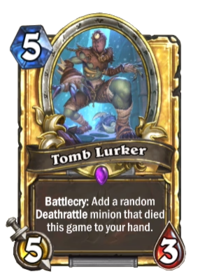 Battlecry: Add a random Deathrattle minion that died this game to your hand.

She hangs out in all the tombs, but she rarely posts.

Tomb Lurker is an epic neutral minion card, from the Knights of the Frozen Throne set.

Tomb Lurker can be obtained through Knights of the Frozen Throne card packs, or through crafting.

Summon
Ready or not, here I come!
Attack
Found you!