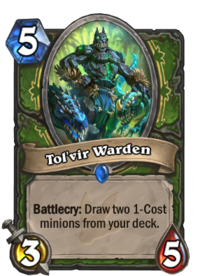 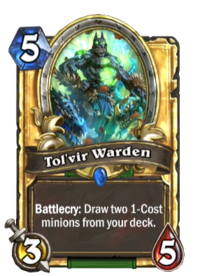 Ferocious in combat… and even more terrifying in pet battles.

Tol'vir Warden is a rare hunter minion card, from the Journey to Un'Goro set.

Tol'vir Warden can be obtained through Journey to Un'Goro card packs, or through crafting.

This minion has poor stats for its cost, but has powerful selective card draw to make up for it. It's most useful for drawing out one-drops required to complete The Marsh Queen quest, or for fishing for Carnassa's Brood after its completion. It also combos well with Raptor Hatchling for drawing the 4/3 Raptor Patriarch more reliably.

Summon
Come to me, little ones!
Attack
Down!