For the minion of the same name, see Tirion Fordring

Tirion Fordring is a retired hero that the player could pick in the Battlegrounds game mode. 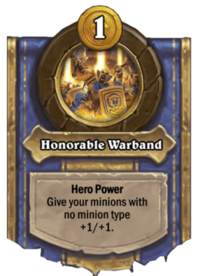 Tirion Fordring makes better use of tribeless minions than any other hero in Battlegrounds. While most heroes would pass up these minions or sell them in the late game, Tirion's ability to reliably buff them means he can get quite a lot of mileage out of minions like Crowd Favorite, Righteous Protector, and Bolvar, Fireblood. Furthermore, as tribeless minions are rarely contested, Tirion will often have no problem recruiting good minions to buff and can get triples of them with relative ease. Tirion is also one of the very few heroes that can reliably buff Zapp Slywick, which can be a huge asset for shutting down warbands reliant on weak key minions.

Tribeless strategies are not the only ones Tirion can pull off, however. Some tribe-based strategies make use of strong tribeless support minions like Baron Rivendare and Wrath Weaver, which are equally valid targets for Tirion's buff, either to help them snowball or make them less vulnerable to being sniped. Furthermore, the ability to buff Lightfang Enforcer and Brann Bronzebeard reduces the tempo loss suffered from running these minions.