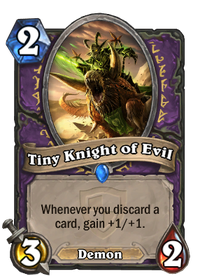 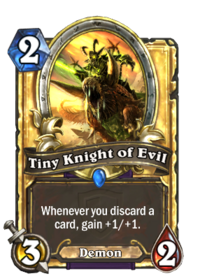 Tiny Knight of Evil is a rare warlock minion card, from the Grand Tournament set.

Tiny Knight of Evil can be obtained through The Grand Tournament card packs, or through crafting.

This card shines when multiple discard effects are used. Doomguard and Dark Bargain are especially mana-efficient options, due to the fact that they both discard 2 cards from your hand. Other solid picks include Expired Merchant, Nightshade Matron, and Soulfire. Tiny Knight of Evil also works well in conjunction with decks running other discard synergies like Hand of Gul'dan and Silverware Golem.

With many access to discard cards early game, a Tiny Knight of Evil can become deadly as there is little to no option to clear it.

This imp rides a felhound as a mount. It is apparently so evil that its enjoyment is fulfilled when players lose cards from their hand.