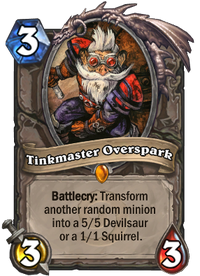 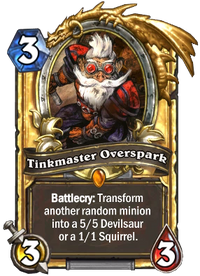 Battlecry: Transform another random minion into a 5/5 Devilsaur or a 1/1 Squirrel.

Tinkmaster Overspark is a legendary neutral minion card, from the Classic set. His Battlecry transforms another random minion into one of two possible Beasts. 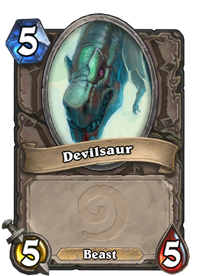 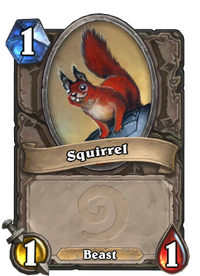 Tinkmaster Overspark is a very risky card. This card is best used in a situation where the controlling player has little to lose, or the opponent has a lot to lose.

An important limitation is that Overspark will not be selected as the target for his own ability. If played with only a single minion on the board (even if it is Stealthed), that minion is guaranteed to be chosen as the target.

Overspark can be useful when played on a board filled only with low-stat friendly minions without abilities, such as 1/1 minions. This provides a 50% chance of upgrading one of these minions to a 5/5, serving as a useful boon. However, be aware that this will also change the minion's type to Beast, making it less desirable for type-synergy such as Murloc play, for example.

Overspark is useful against extremely powerful minions with useful card text or enchantments such as Malygos or Ysera (and other strong minions not susceptible to Big Game Hunter). Even if the result is still a substantial 5/5 Devilsaur, it is better than things such as high health or devastating abilities. Note that the main effect of this ability is to remove all card text and enchantments, effectively Silencing the target minion; the precise stats produced cannot be predicted, and are often of smaller consequence.

The random targeting of Overspark's Battlecry can make it effective against Stealthed and "Elusive" minions, such as Shade of Naxxramas or Spectral Knight. Even if the result is a 5/5 Devilsaur, by transforming the minion the Stealth/Elusive ability will be removed, allowing the player to then specifically target it with another effect.

Overspark's Battlecry can be used as a (somewhat unreliable) tech card, since his Transform effect "deletes" a minion from the list of destroyed minions, preventing them from being brought back with Resurrection effects. This prevents cards like Doomcaller, N'Zoth, Feugen/Stalagg, Bloodreaver Gul'dan, and Witching Hour from reviving key minions and significantly reduce its effect.

Summon
This time, for sure!

Tinkmaster Overspark is a level 57 gnomish engineering trainer located in Tinker Town in the dwarf city of Ironforge. He holds the title "Chief Architect of Gnomish Engineering".

"I am Tinkmaster Overspark, and I am the chief architect for modern gnomish engineering principles in the world today. It is my job to ensure that the power of invention continues to shine brightest from our arclight spanners than anywhere else!

Also, if you happen to know a good schematic for radiation elimination, we just so happen to be in the market for one right about now…" - Tinkmaster Overspark 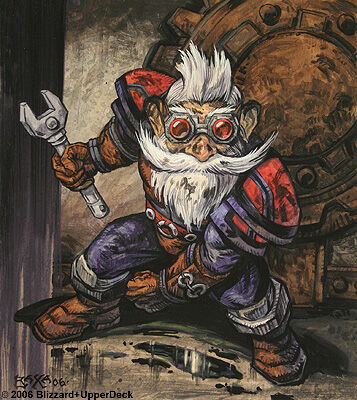