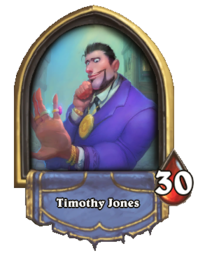 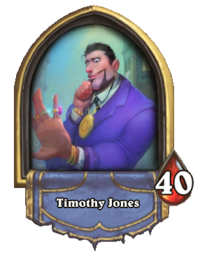 Timothy has never dusted a golden. Not even once!

Timothy Jones is a boss that can be encountered in chapter 3 of The Dalaran Heist.

Timothy's hero power will make his minions incredibly strong. While controlling the board, keep some removal for when they drop. Timothy's decks are significantly different between Normal and Heroic modes, so they each require different strategies.

Timothy's deck mainly consists of Legendary minions with relatively simple or RNG-based effects, so they can be easily countered or even exploited if they are mind controlled or have effects that benefit both players. However, he also uses Prince Malchezaar and Weaponized Piñata, who give him Legendaries that are impossible to predict. Although the majority of Timothy's arsenal features neutral minions, he is actually a paladin hero, and uses powerful paladin cards like Tirion Fordring and Ragnaros, Lightlord. He rarely uses his Hero Power, giving you some time to kill his minions before he can use it.

Timothy uses a defense-oriented deck with Taunt and Divine Shield. While his minions may be weak at first, he can turn them golden before giving them a devastating +8/+8 buff, so it's important to stock up on damaging cards or instant removal. Cloakscale Chemist and Silent Knight are even bigger threats as their Stealth mixed with Divine Shield gives them a safe turn for Timothy to ready his buff. He also uses Never Surrender! to lengthen time for his minions and Getaway Kodo to return minions back to his hand. His most powerful cards include Crystalsmith Kangor, who heals him significantly using his Lifesteal combined with his doubled healing ability once he gets the buff, Mosh'Ogg Enforcer, who is already an irritating threat due to having 14 health, and Sylvanas Windrunner, who presents the unfavorable choice of either killing her and letting her take control of one of your minions, or avoiding the risk while giving Timothy enough time to buff her. To defeat him as soon as possible, prioritize getting rid of his minions and attack face as much as you can.

Timothy Jones
Oh my, that outfit. You could use something new, yes?
George! You're lookin' a bit... drab. Where's Karl? (vs. George the Fallen)

Timothy Jones
My my, you keep running your mouth.

Timothy Jones
Making a minion golden
Let's class things up a bit more.
This goes with my outfit better.
This one could be a bit more... beautiful!
Would look a lot better in gold.
Buffing
Now this. This I can work with.
Oh you are just STUNNING.
That ferocity! Lookin' good!
The crowd is loving it. This one's a natural.

Timothy Jones
Does my hair look OK?
You villains could accessorize better, at the very least.
Your outfit is rags and bags. Get a grip.

Timothy Jones
Maybe I could find you something more... beautiful?

Timothy Jones
An outfit fit for a king!

Timothy Jones
I'm a bit of a crystalsmith myself, you know.

Now that's a mech with a sense of style!

Oh no no, these are not for sale.

Well, that's a fancy rock!
Treasure
At least you've got some bling on you.

Timothy Jones
Let's face it, you never had a chance.

Timothy Jones (a.k.a. TJ) is a human jewelcrafting trainer and quest giver found in Cartier & Co. Fine Jewelry in Dalaran.