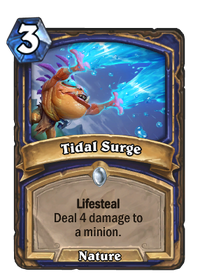 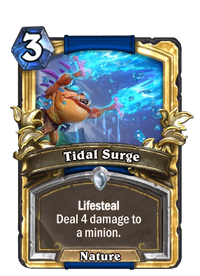 Deal 4 damage to a minion. Restore 4 Health to your hero.

Tidal Surge is a common shaman spell card, from the Journey to Un'Goro set.

Tidal Surge can be obtained through Journey to Un'Goro card packs, or through crafting.

This card has a higher mana cost than other cards that deal 4 damage to a minion (Stormcrack, Shadow Bolt), which is made up for by the additional healing effect; making this card more comparable to Jade Lightning.

When the opponent has lethal damage on the board, playing this card to remove a high attack enemy minion and simultaneously healing your hero can buy you an extra turn.