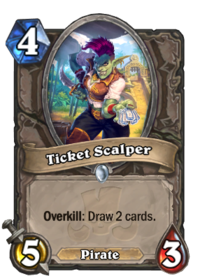 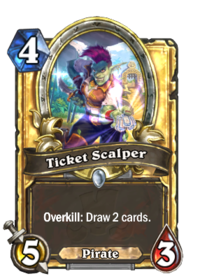 Takes ten percent off the top.

Ticket Scalper is a common neutral minion card, from the Rastakhan's Rumble set.

Ticket Scalper can be obtained through Rastakhan's Rumble card packs, or through crafting.

This minion has a very good Overkill effect of card draw, but its low Health and lack of other effects makes it ineffective when played by itself. However, giving Rush with cards like Serrated Tooth or Captain Hooktusk will allow it to Overkill a minion effectively.

Rikkar stood on the intricately cobbled path and gazed up at the fabled Gurubashi Arena. Ever since he was a little troll, he’d dreamt of being here, preparing to compete at the legendary Rumble. As the crowd streamed past him toward the gates, he paused to savor the moment: the thrill of anticipation on the air, the roar of the crowd in the stands, the grimaces of pain as chumps paid the scalper for last minute tickets. Nothing in the world was like Rastakhan’s Rumble![1]