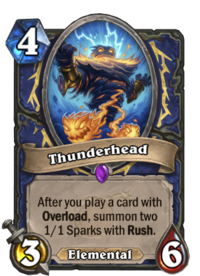 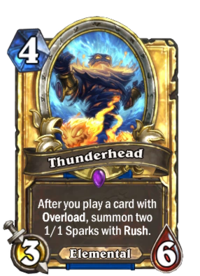 After you play a card with Overload, summon two 1/1 Sparks with Rush.

Most of his friends are still Metalheads.

Thunderhead is an epic shaman minion card, from The Boomsday Project set.

Thunderhead can be obtained through The Boomsday Project card packs, or through crafting. 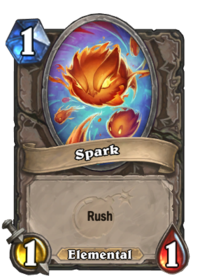 This card's effect generates very high board value, effectively adding 2/2 worth of stats or 2 damage per Overload card. Combined with lower cost Overload like Zap!, Beakered Lightning, or Voltaic Burst it can generate a large amount of early game tempo, enough to make up for the overloaded mana. A very powerful inclusion in Overload-based decks as well as token decks.

Summon
Shall we make a storm?
Attack
Thunderstruck!