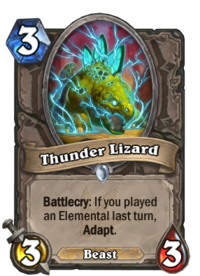 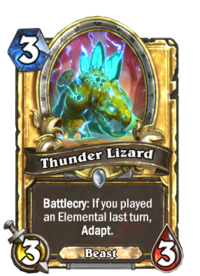 Battlecry: If you played an Elemental last turn, Adapt.

What? THUNDER LIZARD is adapting!

Thunder Lizard is a common neutral minion card, from the Journey to Un'Goro set.

Thunder Lizard can be obtained through Journey to Un'Goro card packs purchased online from the Battle.net shop, or through crafting.

Thunder Lizard is a great minion for its cost as long as its Battlecry is triggered. It is potentially superior to many three drops, such as Scarlet Crusader (Crackling Shield), Ice Rager (Flaming Claws), Thrallmar Farseer and Dragonhawk Rider (Lightning Speed), Spider Tank (Volcanic Might), Emperor Cobra (Poison Spit), and so on. It also has versatility, in that you get to choose what effect is needed most. Doing this does require an Elemental deck though, and since this isn't an Elemental itself, it may slow down other cards like Tol'vir Stoneshaper.

Since Thunder Lizard is a Beast, it can be a useful addition for Hunter and Druid decks with both beast and elemental synergy.

A thunder lizard is a heavy-set, large lizard that is implied to be a distant relative of the kodo. They are aggressive beasts that prefer canyons and plains. When in combat, they shoot lightning from their mouth at distance and dole out harsh headbutts at close range. Thunder lizards come in a variety of colors, including blue, pink, and gray, and live in Durotar, the Barrens, Stonetalon Mountains, and Desolace.

It is said that some rare kodos are bound to the spirits of the sky and storm. Thus, the tauren have legends about those they call lightning lizards, thunder lizards and storm walkers. Whether or not these behemoths actually have supernatural powers remains to be seen.