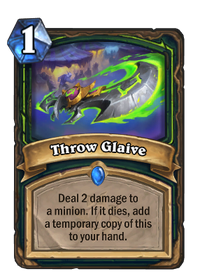 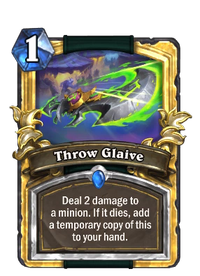 Deal 2 damage to a minion. If it dies, add a temporary copy of this to your hand.

Throw Glaive is a rare demon hunter spell card, from the Madness at the Darkmoon Faire set.

A flexible card for Control Demon Hunter, which can destroy multiple small minions or just be used to chip at a large one.

In World of Warcraft, Throw Glaive is a demon hunter ability allowing a demon hunter to throw their weapon at a distant enemy, with the added effect of it ricocheting to hit other enemies.