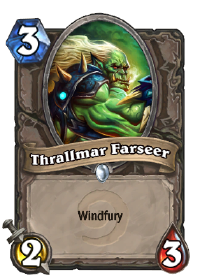 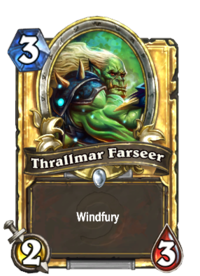 He's stationed in the Hellfire Peninsula, but he's hoping for a reassignment closer to Orgrimmar, or really anywhere the ground is less on fire.

Thrallmar Farseer is a common neutral minion card, from the Classic set.

Thrallmar Farseer can be obtained through Classic card packs, through crafting, or as an Arena reward. 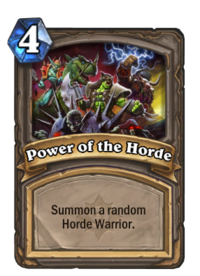 As with all Windfury minions the Thrallmar Farseer profits doubly from any buffs to his Attack. For example, equipping him with a Rockbiter Weapon increases his potential damage output per round by 6 rather than 3, since he is able to attack twice.

Summon
What does the future hold?

Attack
I see your end!

Farseers, or far seers, are powerful and highly accomplished shamans.

Far seers are not only tied to the elements of the earth and sky, but are also adept at foretelling the future. Their wisdom is outshined only by their courage and ferocity in combat. When the enemies of the Horde advance, the far seers mount their loyal dire wolves and wade into battle wielding all the elemental powers of their shamanistic birthright.

Thrallmar is a Horde town found in Hellfire Peninsula, Outland. It was founded and now led by Nazgrel, commander of Thrall's security, as an opportunity to gain resources and to have a decent control over what's going on in this demon-infested area.

Thrallmar Farseer was voiced by Lance Henrikson, who also voiced The Black Knight.