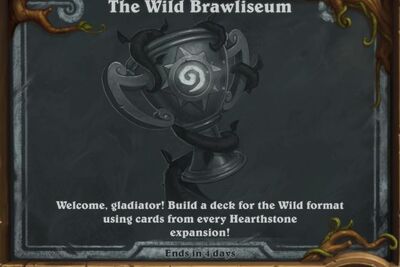 Welcome, gladiator! Build a deck for the Wild format using cards from every Hearthstone expansion!

The Wild Brawliseum is a Tavern Brawl. It debuted on February 28, 2018. For exact times, see the schedule.

This Tavern Brawl is a cross between what we're used to seeing for Heroic Brawls and bits of Arena.

This brawl is a part of the 2018 Wildfest Hearthstone event.

There is no strategy involved necessarily, it all comes down to which cards you have or don't. For an advantage over the opponent build a deck who's cards have not been altered too much. A deck which was once popular will guaranty a win. An example of this is Secret Paladin.