Lei Shen, the Thunder King is an alternate hero for the

"I am Lei Shen, slayer of kings and gods. You have made a grave mistake."

Emperor Lei Shen (pronounced LAY-shen), also known as the Thunder King, was the first emperor of the mogu and the most powerful warlord in mogu history. After stealing the power of storms from the titan keeper Ra, Lei Shen united the mogu clans into the first great mogu empire. Able to defeat even an August Celestial in combat, none were able to stop his goals of unifying Pandaria. During his rule, Lei Shen made several significant changes and contributions to Pandaria. The construction of the Serpent's Spine, the great barrier separating the dreaded mantid from the rest of the Empire, is often cited as his greatest achievement.

Recently, the Thunder King was resurrected by the mogu's Zandalari allies and attempted to unify the mogu once again, serving as the main antagonist in patch 5.2. However, the combined Shado-Pan, Alliance, and Horde assault on the Isle of Thunder put an end to Lei Shen's rule once and for all.

The Thunder King is unavailable to new players. It's unknown if he will become available again.

The Thunder King was available for purchase in the limited-time Master's Bundle.[1] 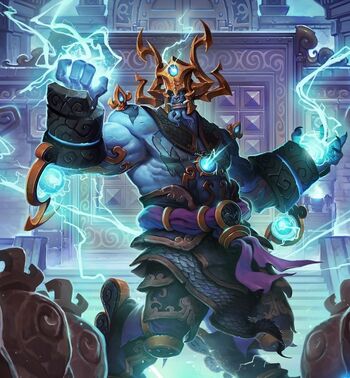 Once unlocked and selected for use, The Thunder King is used as the hero whenever playing with a shaman deck. The Thunder King comes with his own portrait, emotes, and hero tray art, as well as featuring a special animation when using his Hero Power, Totemic Call.

When viewed in the Collection, The Thunder King has the following flavor text:

The Thunder King uses the power of storms to terrify his enemies... and their house pets.

Purchasing The Thunder King unlocks the following card back.