From Hearthstone Wiki
Jump to: navigation, search
The Soularium
Regular 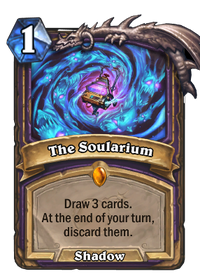 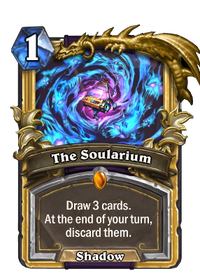 Draw 3 cards. At the end of your turn, discard them.

The Soularium is a legendary warlock spell card, from The Boomsday Project set.

The Soularium can be obtained through The Boomsday Project card packs, or through crafting.

This card offers similar strengths as Tracking - the ability to "choose" from your next three card draws and pick a card you need for the current situation - but even stronger. This card will let you play more than one of the three cards drawn as long as you can afford the mana for it, unlike Tracking which removes the other two cards not chosen. This makes it powerful in the late game for aggro decks like Zoolock, where it's more likely to be able to play all three cards. While it can also be used in control decks, you are less likely to draw low-cost cards and if any 10-mana card like Bloodreaver Gul'dan is drawn it becomes impossible to play.

You can also use this card to discard a bunch of cards quickly. It speeds up Lakkari Sacrifice by three steps and gives a Tiny Knight of Evil +3/+3, significant in early turns. If it draws a Silverware Golem, Hand of Gul'dan, etc. it creates a huge advantage. On top of this, you can choose to play the drawn cards instead, giving them a brief window of safety.

You can use Plot Twist to shuffle back in drawn cards, preventing them from getting discarded.

In life, when I could still taste, feel, and experience happiness, I wasted precious hours studying mathematics. As a banshee, I chose to research a less unsavory subject: the emancipation, analysis, and practical application of souls. I have founded an entirely new field of study. I call it Soulology!

I’ve approached my studies methodically and precisely. What I’ve learned has enabled me to develop entirely new technologies to cheaply and efficiently harvest souls, refine them, and then focus them into to their purest essence. And I can do it with finer precision and with greater care than the clumsy manipulations managed by most Warlocks.

While the living are . . . crude in their base form, the souls they contain are truly remarkable! Once freed from their fleshy prisons, they soar free to become a readily accessible energy source far richer and more versatile than Stormsurge’s ludicrous light shows. And there are other perks as well: terrifyingly powerful weapons! Vast amounts of information delivered instantly! Fewer gnomes!

I’ve even developed a prototype that allows for soul essence transposition. Why travel from place to place, when you can simply swap essence with another creature that is already where you wish to be?

Of course, there are always challenges. . . . Zerek has been helpful, but I could always use more test subjects. And the souls are remarkably persistent in maintaining a connection with their erstwhile hosts. Also, while the Soularium grants access to impressive stores of knowledge, the sudden catastrophic memory loss is—admittedly—something of an inconvenience.

Still, I’m certain that Dr. Boom will agree that what I’ve accomplished here is among the most important breakthroughs in Boom Labs. Now, fetch me some more gnomes. I have work to do.[1]