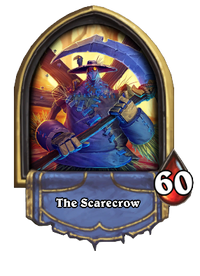 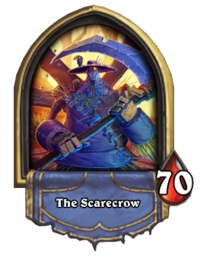 His enchanted scythe drinks deep from every harvest.

The Scarecrow is a boss that can be encountered during the Monster Hunt. 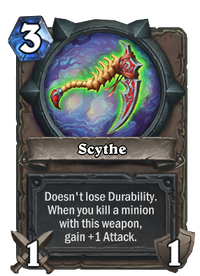 Pray to the heavens for an Acidic Swamp Ooze or weapon removal.

Be wary of using your hero power without trading the minion. Too many cheap minions will lead to the boss' Scythe becoming very large and he will start ignoring clearing away minions in favor of aiming it at your face.

Blingtron starts in your deck so try to get that out quickly (And use your hero power to make sure his weapon isn't too good from the Blingtron). Save some powerful removal like Polymorph for his bigger mechs such as Foe-Reaper 4000 and Sneed's Old Shredder. Once his weapon is removed it gets much easier. He has few removal spells, so if you can keep his minions away from your starter Water Elemental, it will ensure he's frozen for the rest of the game.

The best possible out is the card Sabotage. Once the weapon is removed it is a walk in the park to clear this boss.

The Scarecrow
The reaping will commence.

The Scarecrow
Scythe to meet you.

Killing a minion with Scythe

The Scarecrow
Warning: Target has no soul.

The Scarecrow is original to Hearthstone.