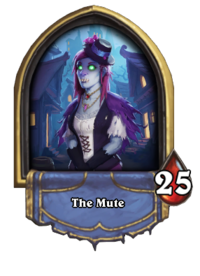 The Mute is a boss that can be encountered during the Monster Hunt. 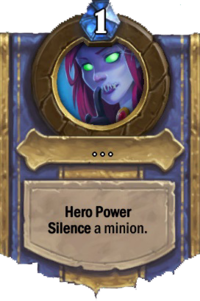 The Mute is original to hearthstone.

Even though she is a lower level boss, she will still be a tough opponent because of her silencing cards and abilities conveniencing her and not-so-much for you. Relying on synergy is a bad strategy as her deck and hero power can shut that down in at least one turn.

You will find yourself using your cannon more than ever.

Your beast synergy won't be of much use. Whatever you do, don't let her build a board.

Keep a number of spells in you starting hand. Start dropping minions until you have a board.

Your deal damage cards should always be used to their full potential with a combo.