From Hearthstone Wiki
Jump to: navigation, search
The Mistcaller
Regular 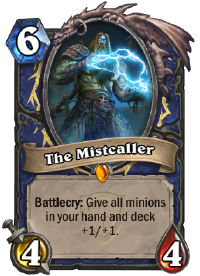 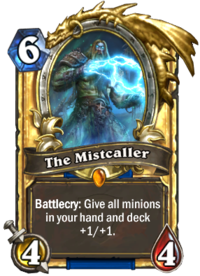 Battlecry: Give all minions in your hand and deck +1/+1.

Calling the mist doesn't sound all that great. "Ooooh, it is slightly damp now!"

The Mistcaller is a legendary shaman minion card, from the Grand Tournament set.

The Mistcaller can be obtained through The Grand Tournament card packs bought through the ingame Shop, purchased online from the Battle.net shop, or through crafting.

This card is a tempo loss when first played, but from then on all minions played will benefit from a +1/+1 boost to their stats. This greatly improves control shaman, as the longer the game goes from when this is played, the more the shaman can take advantage of the +1/+1 effect. The effect is doubly important for Windfury minions and makes Al'Akir the Windlord an even better finisher than he already was.

Summon
You cannot stop the Kvaldir!
Attack
Mists quench you!

The Mistcaller is in fact Mistcaller Yngvar.[10] The minion's title was changed due to its real name being "hyper unpronounceable".[10]

Yngvar is a kvaldir found in Hrothgar's Landing in Northrend. His defeat is the objective of a daily from the Argent Tournament.

"The kvaldir have returned to the coasts of Northrend and if left unchecked, they will prevent our supplies and reinforcements from arriving. One of them, known as Mistcaller Yngvar, has taken up residence in a cave on the western side of Hrothgar's Landing. There, he manipulates the mists to conceal the kvaldir and the sea beasts they command.

Take this charm and travel across the strait north of the tournament grounds, to Hrothgar's Landing. Find the mistcaller's cave and use the charm to reveal him." 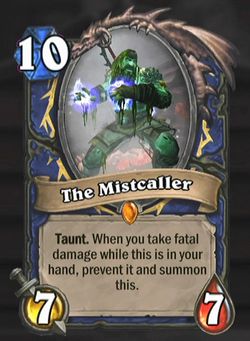 An earlier iteration of The Mistcaller, which "broke down the nature" of Hearthstone's play

The original design for The Mistcaller was as "Mistcaller Yngvar", a 7 mana 6/7 with the text "Battlecry: Give your Totems +5 Health and Taunt." This fit the developers' desire for The Grand Tournament to "juice up" the shaman's synergy with its Hero Power Totemic Call as well as its other Totems, but wasn't quite enough of a "game-changing effect".[11]

The next iteration was as "The Mistcaller", a 10 mana 7/7 with the text "Taunt. When you take fatal damage while this is in your hand, prevent it and summon this." The design was based on a fan-made card that had featured in a community card creation competition, named "Spirit Healer". However, this design was a little too game-changing; the card's existence began to "play mindgames with everybody" with opponents assuming any shaman had a Mistcaller in hand, forcing them to change their entire strategy to compensate for the expected outcome of fatal damage, and holding back damage in case the Mistcaller appeared. According to Jason Chayes this "broke down the nature of what we're trying to do with Hearthstone", slowing down matches and making players second guess themselves. The design was again changed.[11]

"Version three" of The Mistcaller was a 5 mana 5/5 with the text "Taunt. Your Totems are Immune." The developers liked this design, but didn't feel it was exciting enough.[11]

The card was finally changed to its current design: a 6 mana 4/4 with the text "Battlecry: Give all minions in your hand and deck +1/+1." The design was based on one for a priest mechanic the developers were experimenting with at the time; it was instead put to use in the final version of The Mistcaller.[11] 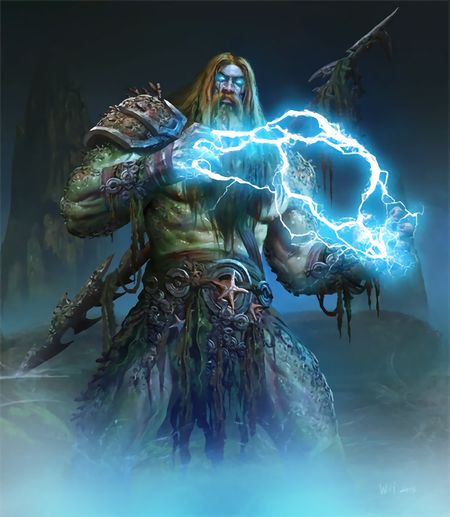