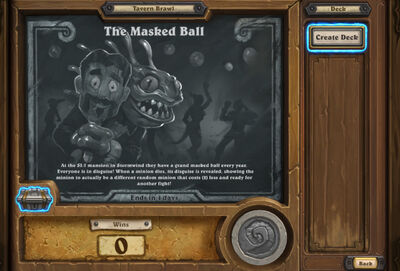 "At the SI:7 mansion in Stormwind they have a grand masked ball every year. Everyone is in disguise! When a minion dies, its disguise is revealed, showing the minion to actually be a different random minion that costs (2) less and ready for another fight!"

Additionally, The Masked Ball was one of nine Tavern Brawls featured as part of the 207th Brawl, The 207th Brawl Spetacular!.

This Brawl sees players doing battle with their own custom decks, of any class. The key change is that whenever a minion dies, it will summon in its place a random minion that costs 2 mana less.

This is achieved through a special Deathrattle enchantment, automatically granted to all minions of 2 mana cost or higher upon being played from the hand: Mystery Pilot - "Who could it be?!" Minions which are summoned, but not played from the hand, therefore do not gain the enchantment - this includes minions summoned through the Mystery Pilot effect. The cost of the minion summoned from the deathrattle is based on the cost of the minion when it was played, which means mana cost modifiers will take into account.

Cards such as Piloted Shredder, Piloted Sky Golem and Harvest Golem all possess advantages in this mode as their Deathrattle will summon two minions instead of one. Any card played from the hand gains an extra Deathrattle of spawning a minion costing 2 mana less, so combining Baron Rivendare with any of these will result in four minions spawning, allowing the player to gain a much stronger board presence. Unearthed Raptor can also be used to achieve a similar result.

It's worth noting that minions not put into play directly from the hand will not have the "Mystery Pilot" enchantment necessary to summon a new minion. This includes minions summoned by the following:

However, cards that copy a summoned minion, such as Mirror Entity or Doppelgangster, will have the "Mystery Pilot" deathrattle.

The minions spawning from the other minions count as summoning minions, so cards such as Knife Juggler are made very useful for dealing extra damage. Silencers such as Spellbreaker will remove Mystery Pilot and help with board control. Since the board will likely contain several minions, cards like Sea Giant and Defender of Argus may have more value than typical.

Another strategy would be to assume your opponent is going to play expensive minions and try to run him down before he can muster his army. Face Hunter or deck with a lot of murlocs that can buff each other works well. Some murlocs are going to summon Target Dummy, which is going to temporarily protect the other minions. If your opponent does not have an AoE spell, you can quickly win. If the match is going to last more than a few turns, you risk running out of cards, but including Kel'Thuzad and minions with Poison ability should help securing victory.

Priests can excel in this brawl by creating a very disruptive deck. Priests have access to many silence effects like Mass Dispel and Kabal Songstealer to prevent enemies from summoning minions, as well as cards like Potion of Madness and Cabal Shadow Priest to steal enemy minions, and their deathrattle with them.