The Lich King is a hero that the player can pick in the Battlegrounds game mode. 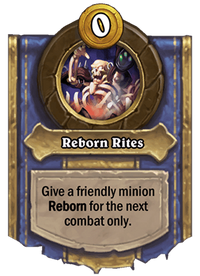 The Lich King's Hero Power gives a minion an extra bit of survivability, making builds that rely on support minions to buff your board like Mama Bear less likely to get shut down, and gives it extra protection against enemy minions that can snipe it, like Zapp Slywick and Kaboom Bot. It can also be used on a Deathrattle minion like Spawn of N'Zoth or Ghastcoiler to double its Deathrattle, or on a Divine Shield minion to make it need at least two extra hits to kill. Targeting Maexxna is also an option if you're facing an extremely high-health wall and need an extra Poisonous hit for an advantage.

Note that the reborn minion is summoned after Deathrattle effects, so mass token-summoning minions like Rat Packs and mechs magnetized with Replicating Menace are not advised candidates. Also, this has no effect when cast on a minion already having Reborn, namely Bronze Warden and Micro Mummy.

Khadgar synergizes well with the Lich King, as he will multiply the reborn copy.