The League of Explorers: Revived! 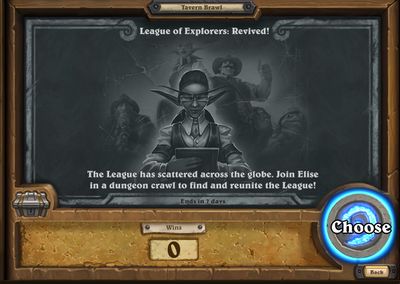 "The League has scattered across the globe. Join Elise in a dungeon crawl to find and reunite the League!

The League of Explorers: Revived! is a Tavern Brawl. It debuted on September 4, 2019.

It is similar to the Dungeon Run mode. 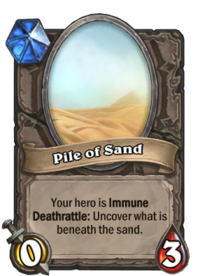 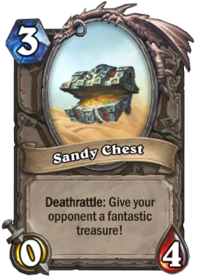 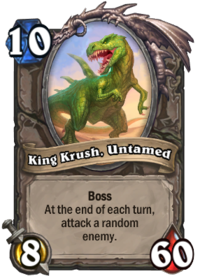 In the process of storyline player joins the minions that oriented to Highlander decks so card bundles don't contain copies of the same card also considering player's deck.

His Hero Power is very strong in the early game, but the autocast forces him to frequently waste mana on pointless attack buffs. Simply swarm the board and tempo him out.

This encounter may look difficult on the first turns because Elise's starting deck has an Aggro Druid base. However, auto-cast of Finley's hero power, summoning Scarab Egg in most cases, no any cards playing by Finley and quite a large amount of Elise's health gives you a lot of opportunities to build a strong board.

Focus on securing the board with buffs and healing and kill each Pile of Sand as they spawn. You can weaken Finley's minions to 1 health so he'll be forced to kill them off before they can attack. This is especially strong if he gets a Vilebrood Skitterer, Obsidian Destroyer or Giant Sand Worm. Always make sure you have damage left over after killing the sand, in case it creates the dangerous minions listed above.

King Krush, Untamed will kill just about anything you summon, so don't bother attacking him directly. Brann's Dino Buddies more than out-value anything you can do, so it's right to sit back and let him soften King Krush for you. Always keep the widest board you can to minimize the amount of damage Krush can deal to you (but no more than 6 minions at the end of your turn, otherwise King Krush will wipe your board). Use a damage spell or minion attacks to finish Krush once he's low.

While Reno never directly targets you, he tries extremely hard to keep your board clear. You can wait out with healing and armor until he deals enough damage to himself before finishing him with spells and Dinotamer Brann.

This fight is extremely difficult compared to the others in this brawl, as Tekahn has an endless supply of 1 mana 4/4s with strong effects, and an aggressive decklist to support them. Be sure to draft lots of recovery and board clears to keep the pressure off. Use fast damage to put pressure on him and kill him before he can eventually overwhelm you.

The League of Explorers: Revived! is a heavily story-based brawl, with thematic fights and dialogue exchanged between all of the bosses. It serves as a follow-up to The Dalaran Heist and lead-in to Tombs of Terror.

For individual dialogue, see each of the boss pages.