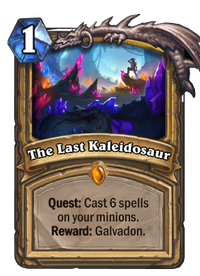 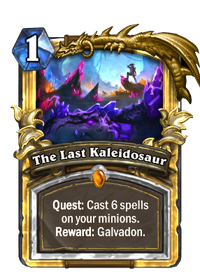 “Impossible!” exclaimed the Silver Hand Recruit, his eyes filled with fear. Uther shook his head, turning the crystal until it caught the light: “Life finds a way.”

The Last Kaleidosaur is a legendary paladin spell card, from the Journey to Un'Goro set.

The Last Kaleidosaur can be obtained through Journey to Un'Goro card packs, or through crafting. 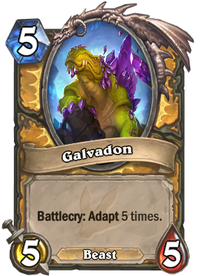 This quest can be completed using various buff and healing spells, ranging from cheap spells like Hand of Protection, Adaptation and Holy Light to more expensive spells like Spikeridged Steed and Dinosize. Other options include Mukla, Tyrant of the Vale to gain two 1-mana buffs, and in Wild, Spare Part-generating cards can also be used. Buffs themselves are easiest to cast on Silver Hand Recruits, and in combination with cards that create more cards, like Lost in the Jungle or adapted minions with Living Spores. Primalfin Champion helps with quest completion by generating duplicate buff spells.

With the release of The Witchwood, completing this quest has become trivial thanks to Sound the Bells!. Casting it repeatedly on a minion on Turn 8, 9, or 10 immediately completes more than half the quest, meaning the player only needs to cast 1 or 2 more buffs to complete it.

Galvadon himself is a powerful and versatile, although finicky minion once the quest has been completed. He doesn't have as much immediate impact as other quest rewards like Amara, Warden of Hope or Crystal Core, but makes up for that by becoming a massive threat. Galvadon himself is weak to Silence and Transform effects, and can be delayed by Return to hand. Because of this, it's important to pick Shrouding Mist and/or Liquid Membrane (if you do not plan on buffing Galvadon the next turn) when you see them to prevent your opponent from removing him. Taking Flaming Claws multiple times combined with Lightning Speed can make Galvadon into an insane finisher, while Rocky Carapace, Massive, and Crackling Shield make him an effective shield. Other combinations like Poison Spit and Massive can make him trade with multiple minions, no matter their size. What effects you choose is reliant on the board state and your win condition. In Wild, Brann Bronzebeard gives Galvadon twice the amount of adaptations to make it even stronger, although there are more chances of adapt effects overlapping. It is important to note that of the 10 adaptation options, 6 have no additional effect if picked more than once in a row; for this reason, you may want to prioritize stat-increasing options for your earlier adaptations.

Kaleidosaurs are a type of dinosaur unique to Hearthstone, with Galvadon being the last living specimen in all of Azeroth. Professor Doyle and Eddie Malone, the protagonists of the Wonders of Un'Goro web series, have embarked on a journey into the heart of Un'Goro Crater in search of Galvadon.[5]

From the journal of Eddie Malone:

I met this guy—Professor George Herbert Doyle the IV—down at the tavern. He was telling everyone a crazy story about Galvadon, a semi-mythical beast rumored to live in the misty depths of a place called Un'Goro Crater. I think he called it a dynamosore? (Not a dragon. My cousin dated a dragon.) He's convinced that Galvadon exists because every other expedition ever sent to find it has disappeared, which Professor Doyle says is obvious proof that it must be there.[6]