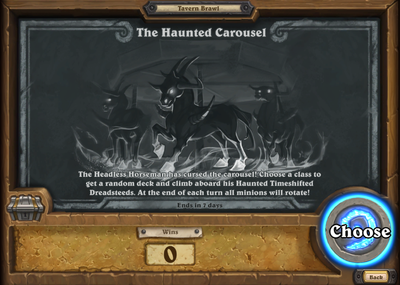 "The Headless Horseman has cursed the carousel! Choose a class to get a random deck and climb aboard his Haunted Timeshifted Dreadsteeds. At the end of each turn all minions will rotate!"

The Haunted Carousel is a Tavern Brawl. It made its debut on October 23rd, 2019.

This brawl lets players choose a class and get a randomized deck. At the end of each turn, minions rotate clockwise if going first or counter-clockwise if going second, with minions on the edge of the board switching sides. Each player also begins with two Timeshift: Dreadsteeds in play. 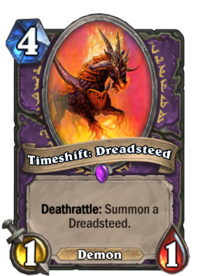 The main goal of this brawl is to always make sure your worst minion and the opponent's best minion are in position to swap each turn. This isn't always possible thanks to Timeshift: Dreadsteeds, which will almost permanently block spots in rotation, so try to plan your turns far ahead. Decks are random, so there isn't much strategy besides using whatever you got to maintain board control.

Don't underestimate Dreadsteeds - they're free damage each turn you control them, which can seriously help remove your opponent's tokens and steal better minions.

Timeshift: Dreadsteeds can be permanently removed using Silence and Transform effects, if you desire.

Player two is at a major advantage in this brawl. Not only will their Dreadsteeds be able to attack on the first turn, they can manipulate the board far more easily than player 1. Cards and hero powers that summon small minions are more effective when going second, since they'll be summoned in position to swap sides. Keep in mind that picking Paladin or Shaman can be risky, since if they go first their hero power will be summoned in the worst spot instead.

If you're going for the card pack reward, it's prudent to just keep trading your Dreadsteeds into the opponent's as much as possible. If your opponent is on the same page, you can very quickly complete the quest together.