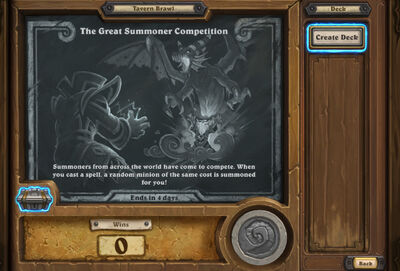 "Summoners from across the world have come to compete. When you cast a spell, a random minion of the same cost is summoned for you!"

The Great Summoner Competition is a Tavern Brawl. It debuted on July 8, 2015. For exact times, see the schedule.

The Great Summoner Competition allows players to construct regular custom decks, using any class. Whenever a spell is cast, a random minion of the same mana cost will be summoned for the player.

Success in this Brawl requires a good knowledge of the possible minions for each mana cost, as well as adaptability to many possible outcomes in each case. With the value of spells essentially doubled, decks featuring many spells will provide good opportunity to exploit the Brawl's special mechanic.

Using spell-heavy decks is preferable to minion-heavy ones, since spells are generating minions anyway. These minions are put on the battlefield before the spells take effect, so e.g. Echo of Medivh will copy that extra minion, Unleash the Hounds may provide one less Hound if the board is full, the spell may cause more damage, if the summoned minion increased Spell Damage etc.

Summoned minions are exhausted unless they have Charge (or are granted it), and their Battlecries are not activated.

Expensive spells result in expensive minions being summoned, so ways of reducing spell cost e.g. Sorcerer's Apprentice may not work to your advantage. Similarly, playing Loatheb in the late game may be just what your opponent needed. Very expensive spells like Pyroblast or Mind Control summon very powerful minions - either Deathwing or Sea Giant - for free, just be sure to have space on the board.

Since there will be a lot of spells used, spell-related minions like Mana Wyrm, Burly Rockjaw Trogg, Stonesplinter Trogg, Flamewaker or Mana Addict work well. The spells summon minions, which will be traded, so death-related cards like Flesheating Ghoul can be very powerful. Mind Control Tech can help to steal minions on populated boards, although it is unlikely to make a huge difference if the opponent has a significant board advantage. Due to the dominant presence of Mages in this Brawl, Kezan Mystic can be useful for taking control of an opposing Secret, especially Ice Block.

For a turn, Millhouse Manastorm reduces the cost of all your opponent's Spells to 0. This can work against your opponent, forcing them to summon Wisp and Target Dummy with their Spells, especially if they have few cards in their hand. On the other hand, playing Millhouse also risks the opponent gaining significant momentum with their free Spells; playing Millhouse against a Mage with a playable Archmage Antonidas in the hand will result in an instant loss.