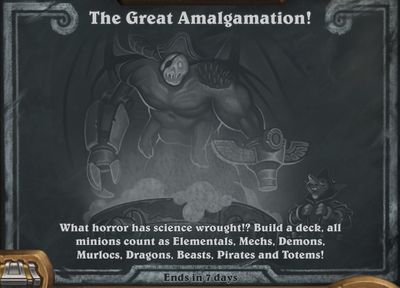 The Great Amalgamation is a Tavern Brawl. It debuted on August 21st, 2019.

This Tavern Brawl sees players doing battle with custom decks. All minions are considered to have the All subtype, just like Nightmare Amalgam.

Paladin and Shaman are best for this brawl, thanks to their hero powers summoning All-type minions. Shaman in particular has cheap synergies for both Totems and Murlocs.

Since every minion has all types, tribal synergy is extraordinarily powerful. Since tribal synergy is usually balanced around only affecting specific minions, this allows to player to use fast aggro decks. Cards like Mechwarper, Thing from Below, Ship's Cannon, Underbelly Angler and Old Murk-Eye are incredibly strong when they affect and gain from all minions.

Specific tribal synergies are much more powerful. Since all minions count as Mechs, Magnetic cards can be attached to anything. Elementals like Blazecaller and Arcanosaur will almost always have their effects active. Any in-hand Dragon synergies can be satisfied with any minion in hand.