For The Dalaran Heist encounter, see The Great Akazamzarak.

The Great Akazamzarak is a hero that the player can pick in the Battlegrounds game mode. 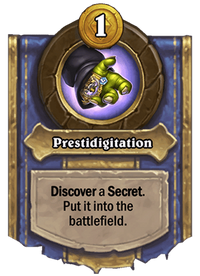 The Great Akazamzarak's Secrets can provide his minions with a powerful edge in combat if used well. However, he is reliant on RNG, which can make his Hero Power's impact inconsistent. Nevertheless, picking a good Secret with your spare coins makes him a tricky opponent.