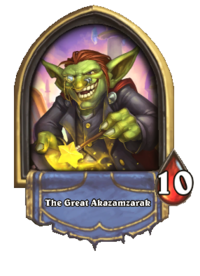 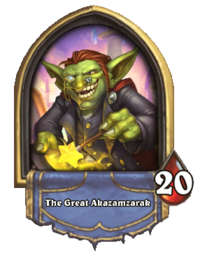 It's not real magic. He's got cards tucked into his sleeve.

The Great Akazamzarak is one of the bosses in The Dalaran Heist. 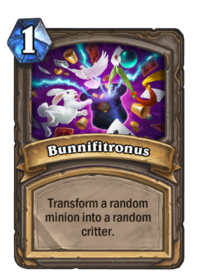 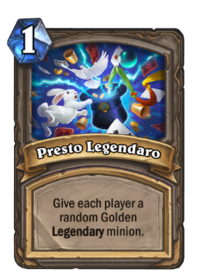 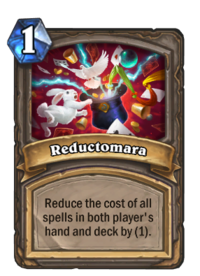 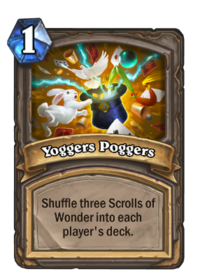 Akazamzarak's hero power generates cards that can be used by both of you. The idea is to have a strategy and turn an advantage that the cards give in your favour by counteracting Akazamzarak's advantage.

Arch-Villain Rafaam
This citadel is home to the greatest mages of Azeroth! As well as Akazamzarak.

The Great Akazamzarak
Step right up!
Yeah yeah yeah revenge whatever. Come up here on stage. (vs. George the Fallen)

Vessina
I prefer to slither.
Mr. Chu
It would be my pleasure.

The Great Akazamzarak
Gather 'round, and witness mystical wonders like you've never seen before!
Have YOU ever seen something so amazing? I think not!
Ladies and gentleman, feast your eyes on these feats of prestidigitation!

The Great Akazamzarak
Just gimme a minute to set up this next part...
My cards aren't supposed to be in this order...
Oooh you're just building suspense... smart.

Bunnifitronus!
It's soft and sweet, but it still bites! It's... a bunny!
Watch as I turn this normal minion, into a rabbit! ...or something!

Pick a card, any card...
Presto Legendaro!
What's it gonna beeee?
(Player gets Dr. Boom) Whoa whoa, not that card! Give it back. Take THIS instead.

Our cards are getting cheaper...
Reductomara!
Watch as this mana cost, DISAPPEARS!

Sometimes I astound myself!
What happens next? Watch and see!
Yoggers... Poggers!

The Great Akazamzarak
Is this a joke? A trick? You can't do that!
Wait a minute- That's MY patented trick!

Casts the other spells

The Great Akazamzarak
An all new feat, just for you, my lovely audience.
(fire spell) Behold as I turn this "participant" into ash!

The Great Akazamzarak
My final.... act...

The Great Akazamzarak is a magician normally found entertaining some Dalaran Citizens at the Eventide in Dalaran. He is an expert with portals and teleportation and is therefore recruited by the Tirisgarde in order to teleport its members inside the Hall of the Guardian, bypassing the security wards.