From Hearthstone Wiki
Jump to: navigation, search
The Darkness
Regular 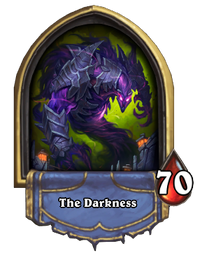 There's a reason to always keep a light on down here.

For the minion card of the same name, see The Darkness

The Darkness is a boss that can be encountered during the Dungeon Run. 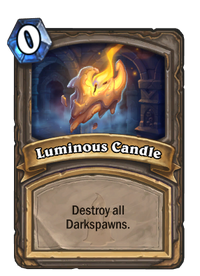 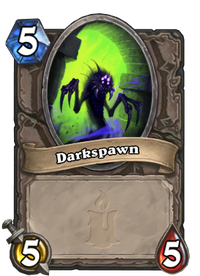 While The Darkness can generate an endless stream of 5/5 Darkspawn, you also begin the game with three Luminous Candles, which are 0-mana spells that instantly destroy all Darkspawns in play. Use these wisely, as the Darkspawn can quickly overwhelm you once you run out of Candles. Meanwhile, The Darkness can supplant its legions of Darkspawns with several Priest cards, the most dangerous being Mind Control.

Should the player have picked up Wax Rager, it can easily fend off the Darkspawn since The Darkness can only create one per turn. Be careful of Mind Control, though, which will turn the Rager on you.

Almost all of The Darkness's deck is removal. It relies entirely on its hero power to beat you down. While this may be frustrating, it also makes the fight fairly predictable. Many of the Hero Cards can allow you to at least keep up with The Darkness and stay alive, and The Darkness is more at risk of fatiguing itself than any other final boss. It likely won't be possible to get many decent hits in on the boss itself while focused on survival, unless you've picked up a fair few large minions and Boots of Haste to play them before The Darkness has too much mana. Survival is key here, as The Darkness is more than capable of wiping any board you manage to build. If you can stay alive, this boss will gradually wither itself out.

Alternatively, having the Cloak of Invisibility in your deck will neutralise all of The Darkness's removal (except for Psychic Scream and Twisting Nether), allowing you to play aggressively and win before its Darkspawns can overwhelm you.

Another alternative is with a spell heavy deck and Robe of the Magi. Direct damage spells can be used to beat down the boss itself while your board clears can help to stave off the Darkspawns, though beware you'll have to take a fair few hits to gain the most efficiency from your cards in this case and you can easily wind up at low health. In this way, The Darkness's removal will largely go to waste.

King Togwaggle
You must bewaring the darkness! This is why kobolds be keeping candles.

The Darkness
Your light is dwindling, adventurer...

The Darkness
I take candle. That's my thing. That's what I do.

The Darkness
Mwahehehah.
Run away...
Darkness...

The Darkness may be intended to represent the Devouring Darkness.

Despite living underground, kobolds do not have keen nocturnal sight, and rely on candles to traverse the mines they call home. However, kobold legends also speak of a dark, devouring presence deep in the caverns of Highmountain, which is the reason that the kobolds fear the dark. The Bluewax of Candle Rock frequently mention that if a kobold's candle goes out, or if they lack a candle altogether, "the darkness" will "eat them". The Bluewax historian Kipp Brightwick tells how the Bluewax were once forced out of their home by a group of drogbar who claimed the cave as their own. However, the drogbar did not have candles, and so "the darkness" began to follow them, until it finally "swallowed them whole", allowing the kobolds — safe with their candles — to move back in. Additionally, a circle of six large candles can be found in the eastern part of Candle Rock. If an adventurer extinguishes the flames of all six candles, a large voidwraith called "Devouring Darkness" will appear and attack them.