The Curator is a hero that the player can pick in the Battlegrounds game mode. 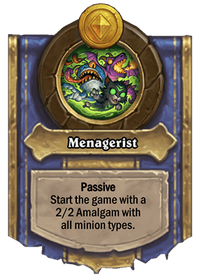 The Curator's Amalgam has the coveted All minion type, which is only shared by Amalgadon, a Tier 6 minion. Belonging to every minion tribe makes the Amalgam extremely versatile, allowing it to get buffed by nearly every card. It can fit into almost any composition, ramps up more easily, and gets easier access to powerful Keyword effects like Divine Shield (through Annoy-o-Module) and Poisonous (through Toxfin). It also works well with Zoobot, Menagerie Magician, and Lightfang Enforcer, requiring less effort to buff as many minions as possible. On top of that, having an extra 1/1 at the start of the game gives the Curator a slight edge in early matches. For this reason, the Curator is a strong and reliable pick for most strategies.

Be careful if Rafaam or Tess Greymane are among your opponents, as they can steal the powerful and flexible Amalgam.