From Hearthstone Wiki
Jump to: navigation, search
The Curator
Regular 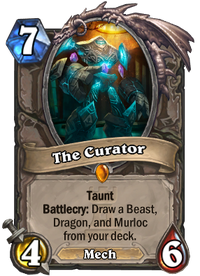 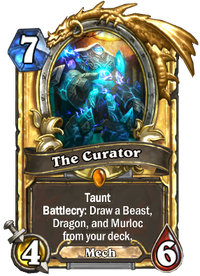 Taunt
Battlecry: Draw a Beast, Dragon, and Murloc from your deck.

The Curator is a legendary neutral minion card, from the One Night in Karazhan set.

Regular The Curator is obtained by completing The Menagerie, the third wing of One Night in Karazhan.

As a Wild format card, both regular and golden versions of The Curator can also be crafted for the following amounts:

The Curator works best with a Zoo deck or "menagerie" deck designed to benefit from this reasonably powerful, late-midrange-focused Legendary, ideally placing a random Dragon, Murloc and Beast from your deck into your hand. Its base stats are unimpressive for a 7-drop, but its Taunt allows it to provide some protection for the minions drawn. Alternatively, it's used to draw key dragon, beast, or murloc card more reliably.

The Curator can support a wide variety of strategies, and works particularly well with midrange/control staples of the appropriate types which favor a heavy field or large hand size, like Stampeding Kodo, Twilight Drake, Primordial Drake, Murloc Knight, and Mukla's Champion. It can also be used to grab powerful late-game control finishers like Ysera, Onyxia, Malygos, Chromaggus, and Nefarian. It purposefully synergizes with its fellow One Night in Karazhan wing rewards Zoobot, Menagerie Magician and Menagerie Warden to boost the cards it finds. Including only a single minion of a type results in a guaranteed draw of the card if it remains in the deck; this strategy can be very powerful, though it reduces total stat-boosting synergy with other potential menagerie cards in the deck overall.

The Curator also has somewhat of a synergy with Prince Malchezaar. There is a good chance to draw a legendary Dragon since most of them are Neutral, plus a smaller chance to draw a Legendary beast, moreso for Hunters and Druids. However, the generated legendaries are random and may not even generate any legendary of the three types, so using the Curator solely for this purpose is unwise.

Having Brann Bronzebeard in play potentially doubles the draw advantage and may be an especially powerful combination. Effects like Spirit of the Dead, Lab Recruiter, and Dead Man's Hand also allow a potentially ridiculous amount of draw, making this one of the more powerful cards for sheer card advantage if enough cards of the three minion types are present in the deck.

The Curator can draw Nightmare Amalgam for any of the three types, if there are two or more copies of Nightmare Amalgam, it might be drawn twice or even three times. This allows for synergies with Dire Frenzy, and potentially also Deathwing, Dragonlord.

Hunter and Druid class Beast affinities are other potential avenues of synergy with Curator/menagerie deck types.

Summon
The Menagerie is for guests only.
Attack
Do not touch.
Death
Ow. 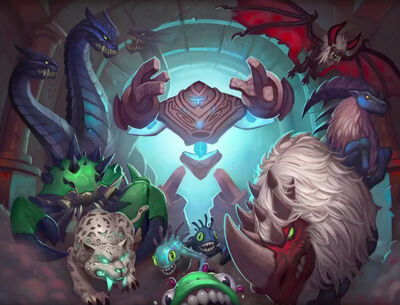 The Curator appears in the One Night in Karazhan adventure as the first boss of the third wing, The Menagerie.