The last act! The stairs are just up ahead!

The Crone is a boss found in the One Night in Karazhan adventure. She is the third boss of the second wing, The Opera. 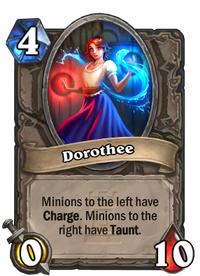 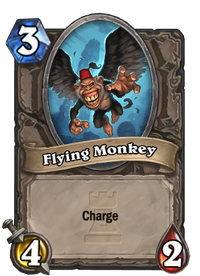 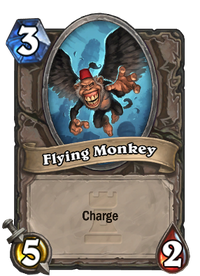 The quickest strategy is to use Priest and get Inner Fire as one of your starting hand to use on Dorothee for a quick 3 turn victory.

Another quick way is to use a Paladin with Bolf Ramshield and Eye for an Eye, and destroy Dorothee. When The Crone uses Twister on you, she will be destroyed, while Bolf Ramshield will suffer 100 damage.

The most significant difference between Normal and Heroic mode is that The Crone is specifically programmed to always draw Twisting Nether on every turn from turn 8 onwards, allowing her to destroy all minions (including Dorothee) before immediately defeating the player with Twister. While it is possible to stall for another turn by playing Counterspell or Loatheb on turn 8, or by casting Ancestral Spirit on Dorothee, it is generally wiser to focus on defeating The Crone before she has enough mana to play Twisting Nether in the first place.

One possible strategy as Priest is to use Divine Spirit and Inner Fire on Dorothee so that she can deal damage to The Crone and quickly deplete her health meter, while using other minions to defend her. Another way is by using Raging Worgen in a Warrior deck, although this is method is somewhat harder to achieve due to the presence of Abomination in The Crone's deck; if combined with Windfury Harpy, the player can perform massive quantities of damage during each turn.

Zoo Warlock also works well against the boss. Sticky minions, such as Possessed Villager and Imp Gang Boss, are best used as taunts to protect Dorothee, since the minions that they summon will also have taunt. Dreadsteed is especially powerful since The Crone will never be able to directly attack Dorothee after you summon it, allowing you to focus your remaining efforts on damaging the boss. Giving all your other minions charge can help you to win the game before turn 8. 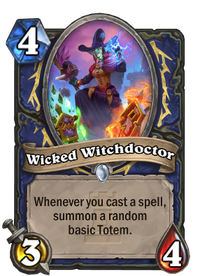 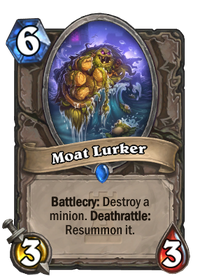 As the final boss of The Opera, defeating The Crone also unlocks the following cards: 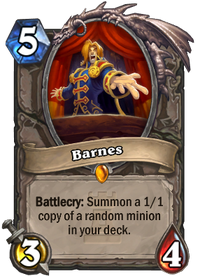 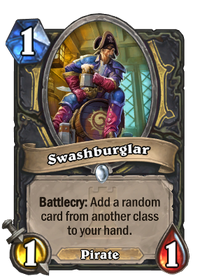 Barnes
At last, our final act! An evil witch pursues a young girl. Will she find her way home?

Dorothee
Oh no, don't let her hurt me!

Moroes
Majordomo Executus is downstairs. Shall I tell him he's arrived too soon?

The Crone
Bring me that girl!

Play Call of the Wild (alternatively, with the presence of a lion, dragon, and bear on board at the same time)

Dorothee
Oh! Lions and dragons and bears! Oh my!

Moroes
Finally! We're off to free the wizard!

Moroes
Onward! Up those stairs, the Curator guards the menagerie. I hope it's not malfunctioning...

"Woe to each and every one of you my pretties! *cackles*"

The Crone is the boss in the Wizard of Oz encounter, one of the three possible boss encounters initiated by Barnes in the Opera event.

The Crone is a troll boss in the Opera House in Karazhan, who follows Dorothee, Roar, Strawman, Tinhead, and Dorothee's pet Tito.