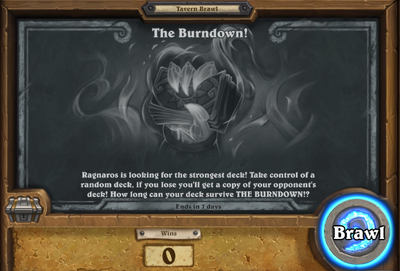 "Ragnaros is looking for the strongest deck! Take control of a random deck. If you lose you'll get a copy of your opponent's deck! How long can your deck survive THE BURNDOWN!?"

The first time players play this Brawl, they are given a random class and unique randomly-generated deck. Each deck has a name (a rough descriptor of the deck type followed by a number) which replaces the player's username. At the end of each game, the loser gains a copy of their opponent's deck, while the winner retains theirs. Decks last for the entire duration of the brawl and are only removed upon losing, causing the stronger decks to slowly spread.

Much like Encounter at the Crossroads, there's not much you can do besides play on curve to the best of your ability the first time you play a deck. However, subsequent games with the same deck can increase your knowledge of your cards, helping shape your game plan. Likewise, many of the stronger decks will become more frequent as you play, telling you what may be in your opponent's hand.

If you have a deck you don't like, you can get rid of it at any time by conceding.