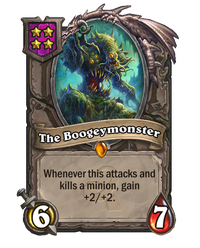 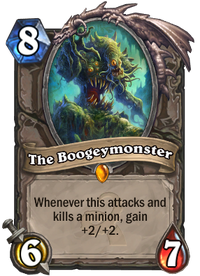 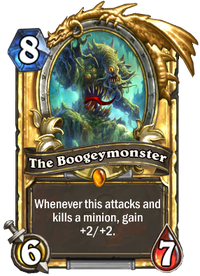 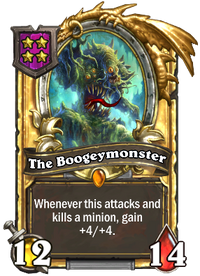 Whenever this attacks and kills a minion, gain +2/+2.

The Boogeymonster was a Tier 4 minion in the Battlegrounds game mode.

The Boogeymonster had high natural stats for its tavern tier, but struggled to grow in size as it lacks a minion type.

Generally, The Boogeymonster was best placed 2nd from the left to attack after a divine shield was cleared but it was only effective earlier in the game when better options were not available or if you were playing Tirion Fordring. If it was picked up in the first place, it was often replaced as the game continued in favour of more synergistic minions, such as Security Rover for Mechs, Mal'Ganis for Demons, Goldrinn, the Great Wolf for Beasts, and King Bagurgle for Murlocs.

The Boogeymonster's card text proved to be especially ineffective in the late game, as it was unlikely to kill a minion upon its first attack.