From Hearthstone Wiki
Jump to: navigation, search
The Beast Within
Regular 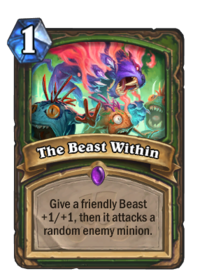 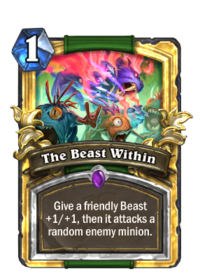 Give a friendly Beast +1/+1, then it attacks a random enemy minion.

The Beast Within is an epic hunter spell card, from the Rastakhan's Rumble set.

The Beast Within can be obtained through Rastakhan's Rumble card packs, or through crafting.

The Beast Within has a cheap pseudo-Rush effect, where you can force your minion to make a new attack this turn, separate from its regular one. This is valuable on minions which have bonuses for attacking more, such as Knuckles or even Gurubashi Chicken. Compared to this unique effect, the +1/+1 stat boost is nearly negligible.

Since the minion makes an attack, any on-attack effect can trigger, such as Splitting Image or Festeroot Hulk. This is a good way to test for Secrets, since your opponent isn't expecting this minion to attack.

The Beast Within is an honor talent for Beast Mastery hunters in World of Warcraft. The talent reduces the cooldown of Bestial Wrath by 15 seconds and causes the hunter to become immune to Fear and Horror effects while Bestial Wrath is active.