The Battle for Gadgetzan 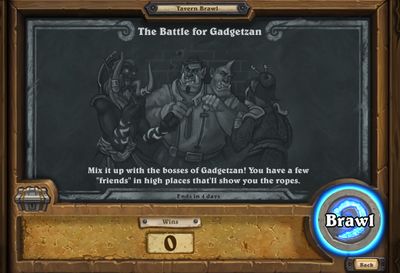 Not to be confused with the brawl Gadgetzan Throw-Down.

"Mix it up with the bosses of Gadgetzan! You have a few "friends" in high places that'll show you the ropes."

The Battle for Gadgetzan is a Tavern Brawl. It debuted on December 14, 2016. For exact times, see the schedule.

This Brawl sees players competing with pre-made decks, matching the three Mean Streets of Gadgetzan crime families. At the start of each match the player is randomly chosen to play one of three decks: Jade Lotus (Druid), Grimy Goons (Paladin), or Kabal (Priest). The player will never be given the same deck as their opponent. During the match, the crime family bosses matching the players' decks (Aya Blackpaw for the Jade Lotus, Don Han'Cho for the Grimy Goons, or Kazakus for the Kabal) appear to exchange taunts and threats.

The decks used in this Brawl appear to match Deck Recipes added with the Mean Streets of Gadgetzan expansion. The names and description for the original recipes are included below.

The Grimy Goons deck revolves around buffing minions in the player's hand.

The Kabal deck is a Dragon Priest deck, with a large amount of Dragon synergy.

The dialogue in each match varies depending on the two classes chosen, and is semi-random in its order, with some responses triggered by game events. To read the full range of dialogue, click 'Expand', to the right.

Opening remarks
Aya: Gadgetzan is SO awesome. I want it!
Kazakus: Hehehe. You'll have to vanquish me to get it....
Aya: Heh heh heh, gladly....

Turn 3
Kazakus: Arrogant girl! You dare mock the most powerful leader in Gadgetzan?
Aya: Maaan, you Kabal types are so boring!

Fill
Aya: Sure is a nice day, huh Kazzy?
Kazakus: DO NOT CALL ME THAT! ARROGANT GIRL!
Aya: Jeez Kazzy, loosen up a little. Have a little fun.

Jade Lotus win
Aya: Well, that was fun. Thanks for playing, Kazzy.
Kazakus: Foolish girl. This is not over....

Kabal winning
Kazakus: Heheh, you're looking a little weary, girl.
Aya: Mostly because you're so boring.
Kazakus: What!? You insolent child! I will be your DOOM!

Kabal win
Kazakus: Hahah! Another foe falls before the might of the Kabal!
Aya: This isn't happening! NONONONONO!

Opening remarks
Kazakus: Gadgetzan will be mine, Han'Cho!
Han: These are some dangerous streets, Kazakus.
Cho: GRIMY GOONS MAKE IT DANGEROUS!

Turn 2
Kazakus: The Kabal are everywhere! Gadgetzan bows to us!
Han: That's nice and everything, but Gadgetzan belongs to the Goons.

Grimy Goons winning
Han: Aw, you look like you had an accident, Kazakus!
Kazakus: You will suffer, Han'Cho....

Grimy Goons win
Kazakus: I will return... more powerful than ever before!
Han: Sorry Kazakus, it's just business.

Opening remarks
Han: Gadgetzan is ours. Beat it, pipsqueak!
Aya: Ya right! I want Gadgetzan for MYSELF!

Turn 3
Aya: Gadgetzan belongs to the Jade Lotus, and the Lotus belongs to me!
Han: Yea? Well us Grimy Goons might have a few things to say about that.

Fill
Han: Gadgetzan belongs to the Goons!
Aya: Nahhh, I like it here. I think I'll stay.

Grimy Goons win
Aya: Nonononono! This is NO GOOD!
Han: Take a break, Aya. Heheh, it'll be good for ya.