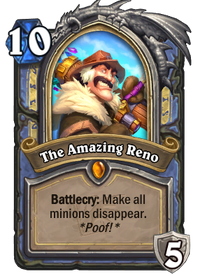 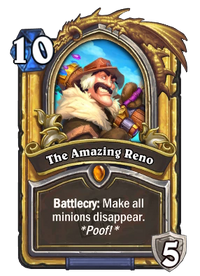 "Please address me by my proper title."

The Amazing Reno is a legendary mage hero card, from the Galakrond's Awakening set.

Regular The Amazing Reno is obtained by defeating Rafaam and Galakrond in Galakrond's Awakening's Chapter 4 of Explorers campaign. 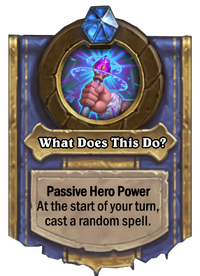 Since Reno's Battlecry effect is symmetrical, he works best in a deck playing few minions. This will reduce the chance of his Battlecry being a downside, as well as increase the number of enemy targets for the random spells he casts.

What Does This Do? is a powerful hero power, but it is extremely unreliable. On average, the ability will occasionally generate free minions, heal yourself, damage or clear the opponent's board, and draw cards; all for zero mana. However, you can just as easily end the game by Pyroblasting yourself, overdrawing in Fatigue, buffing your opponent's minions, or emptying all your mana with a Forbidden Words. Because of this, ending the game quickly should be a priority once Reno is in play. Since the effect triggers at the start of your turn, you have your entire turn to play around the random effect.

If Reno's power becomes too much of a burden, you can replace it with Ascendant Scroll, provided by Raid the Sky Temple. In Wild, it can also be replaced more easily using Frost Lich Jaina or disable it with a Mindbreaker.

The Amazing Reno is a reasonable soft counter to Resurrect Priest, which outright removes minions from their dead pool. It should be saved to hit important minions like Batterhead, Catrina Muerte, Ragnaros the Firelord, and The Lich King.

Summon
Watch closely as I make everyone... disappear!

Unique to Hearthstone, this card represents Reno Jackson as he appears during the events of Descent of Dragons and Galakrond's Awakening.

Reno may have been captured by Rafaam and subjected to endless rhyming puppet shows, but that won’t stop him from injecting some of his signature flavor into Galakrond’s Awakening. Play the Amazing Reno and all minions will disappear. Where did they go? Who knows? Reno definitely doesn’t. Truly amazing work, Reno.[1]