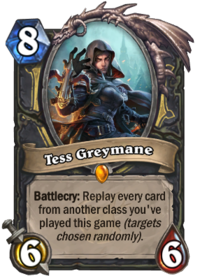 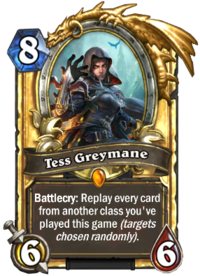 Those who cannot remember their card history are doomed to repeat it.

Tess Greymane is a legendary rogue minion card, from the The Witchwood set.

Tess Greymane can be obtained through The Witchwood card packs, or through crafting.

Tess Greymane can serve as a similar late-game card to Yogg-Saron, Hope's End or Shudderwock. Provided you've used cards like Pick Pocket, Blink Fox, and Academic Espionage to steal cards from your opponent's class and played them, Tess' entry to the board can result in game-bending shifts in power.

The random targeting of all cards she re-plays, however, means she can't necessarily be used as a reliable finisher. Given she only plays cards you've played from another class, she is almost useless in Rogue mirror matches.

One card that is not recommended to play when using Tess is Psychic Scream. Once Tess gets shuffled into the opponent's deck, she will continue the rest of her Battlecry for your opponent.

Summon
You have no idea what I'm capable of.
Attack
Watch and learn.

Princess Tess Greymane is a member of the Royal Family of Gilneas, as the daughter of King Genn Greymane. Her life was saved by a potion made by Krennan Aranas; if not for him, she would have died soon after she was born. Because of her brother's death, she is now the heir to the throne of Gilneas.

After the Shattering destroyed the town of Duskhaven, Tess ventured up to her father's observatory with a single peacebloom flower. She reminded Genn how when she was a little girl, he told her to find one beautiful thing a day as it would make the hard times easier. Even among the ruined Gilneas, she was able to find an unharmed peacebloom, and it gave her hope.

During the exodus to Darnassus, Tess and her mother, Mia Greymane, were aboard the Elune's Radiance while her father was on another ship. The fleet was hit by a powerful storm generated by the Cataclysm, and the ship started to sink. Having a leg broken during the storm, Mia could not move and Tess remained with her refusing to leave, so they both risked to drown. Genn, refusing to lose the last two members of his family, assumed the worgen form and joined the rescue efforts of the night elf sailors from his ship. After the storm, both the women reached Teldrassil safely. Tess' whereabouts until Legion were unknown, but it is possible that she followed her father to Stormwind City.

In the aftermath of the Battle for the Broken Shore, Tess appears on the Skyfire that brings adventurers and other wounded back to Stormwind. If the player chooses to take the optional offered Gryphon ride to Stormwind Keep, she and Lorna Crowley will escort them on their own gryphons, conversing on the way. When flying to Stormwind Keep, Princess Tess Greymane confided to Lorna her concern about the lust for vengeance consuming her father. Lorna states that all Gilneans suffer from that rage, her father more than most. Though Tess concurs with Lorna, she fears more deaths are sure to come. Lorna grimly replies that such is the cost of vengeance and that Gilneas has waited for it long enough. When arriving at Stormwind Keep, Tess tells the adventurer to give King Anduin their condolences for the death of his father Varian Wrynn. The two quickly return to the gunship once the player lands, as they are needed back at the ship. While Tess is dressed in armor for this appearance, it's unknown if she actually had a military role, or if it is due to formal reasons.

Now one of The Uncrowned, Tess is within the sewers of Dalaran in the secret Hall of Shadows. She sends the newest Shadow of the Uncrowned after Garona Halforcen, who has gone to Stormwind to assassinate members of a Burning Legion cult.

The Uncrowned receive word of a large cave at the Broken Shore where the Legion is plotting against the Armies of Legionfall, and together Tess and Fleet Admiral Tethys formulate a plan to stop them. With fel-infused gun powder taken from the Blacksail Crew, Tess and the Shadowblade sneak their way into the Lost Temple and blow the cave up. Afterwards, Tess explains that she has not yet pledged service to the Shadowblade because, while all rogues step into the shadows, it had been especially important that her status remains truly secret. But with the Legion's threat too great, Tess wants to have a greater role in taking them down.

Princess Tess Greymane is heir to the throne of Gilneas, and by all accounts a woman of extraordinary skill and razor wit. Tess combines her father’s iron will with a subtlety and deftness he’s always lacked. She’s well renowned for cleverly using her enemies’ best tricks against them, and she’d make a powerful Queen—though she seems to have little interest in matters of state. In fact, she spends an unusual amount of time around low-born thieves, rogues, and rapscallions.

Lately her behavior has been most concerning. The Princess has been seen haunting—figuratively, as she’s not dead . . . yet—the lonely, rocky shorelines of Gilneas. As the fog rolls in off the sea, she confronts eerie visitors: spectral buccaneers from the depths, whose unquiet spirits rise from the icy gray surf. Even those who know how very formidable the Princess can be fear for her safety during these nightly sojourns. These spirits seem less spectral and more solid with each passing night.

She may need to abandon her pet project soon, in any event. The hunters entering the Witchwood will have need of her skills.[7]