Tenwu of the Red Smoke

From Hearthstone Wiki
Jump to: navigation, search
Tenwu of the Red Smoke
Regular 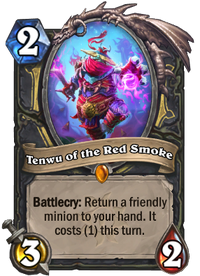 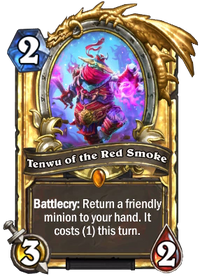 Battlecry: Return a friendly minion to your hand. It costs (1) this turn.

Red, the color of subtlety.

Tenwu of the Red Smoke is a legendary rogue minion card, from the Madness at the Darkmoon Faire set.

Tenwu of the Red Smoke can be obtained through Madness at the Darkmoon Faire card packs, through crafting, or as an Arena reward.

Similar to fellow pandaren Youthful Brewmaster, Tenwu allows you to reuse vital Battlecry effects - but his additional Cost reduction also lets him synergize with costlier cards such as N'Zoth, the Corruptor, or be a part of Combo-heavy strategies such as Edwin VanCleef.

Summon
Come, friend. Let's see what you got
Attack
Nothing but smoke.

Tenwu of the Red Smoke is a level 90 Male Pandaren Rogue Shado-Pan member, who can assist the players with Shado-Pan daily quests after completing the quest The Challenger's Ring: Tenwu of the Red Smoke. Similar in ways to Ren Firetongue, Tenwu is eccentric and highly proud of his own looks and abilities. He can be seen during the Siege of Niuzao Temple.

He later joins with the other elite Shado-pan to assault the Isle of Thunder where he is the objective in Troves of the Thunder King.

Tenwu can be seen with Snow Blossom in the Timeless Isle overlooking the Celestial Court.