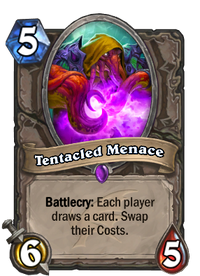 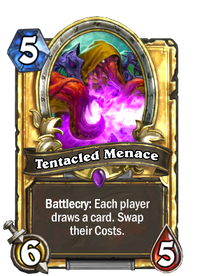 Battlecry: Each player draws a card. Swap their Costs.

He calls this one the "Calamari Special."

Tentacled Menace is an epic neutral minion card, from the Descent of Dragons set.

Tentacled Menace's Battlecry often relies on luck, due to factoring the contents of your opponent's deck as well as your own. If you're lucky, you can reduce the cost of one of your more expensive cards while forcing your opponent to pay an increased mana price, and you can even bring a card that costs more than 10 mana like a Giant or the paladin-exclusive Shirvallah, the Tiger to render one of your opponent's cards unplayable. However, Tentacled Menace may backfire and you will get your card's price raised, while your opponent gets a cheaper card to play on their next turn.

One of the most effective ways to use Tentacled Menace is pulling a Casts When Drawn effect from your deck. All Casts When Drawn spells have a mana cost (typically the same as the card that generated them), allowing them to potentially increase the cost of an opponent's card but bypass any downside on your end. The best among these is Dream Portal at 9 mana.

Summon
Your hands are shaking.

Attack
What a twist! 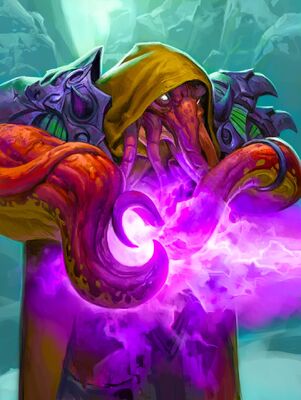