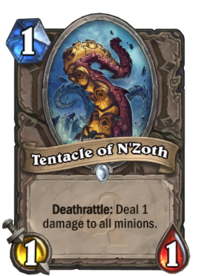 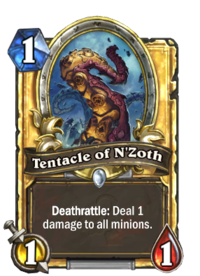 Deathrattle: Deal 1 damage to all minions.

Because EVERYDAY is the Day of the Tentacle of N'zoth.

Tentacle of N'Zoth is a common neutral minion card, from the Whispers of the Old Gods set.

Tentacle of N'Zoth can be obtained through Whispers of the Old Gods card packs, or through crafting.

This would fit well in decks revolving around taking damage, such as warrior decks with Frothing Berserker, Grim Patron and Armorsmith.

A useful defensive measure, a cheaper Explosive Sheep. Could be useful for stall decks like Freeze Mage, which could use Fireblast to activate the Tentacle.

This is a tentacle of N'Zoth, the Corruptor.

N’Zoth probably has more ambition in its littlest tentacle than most beings have in their entire bodies. Since this purple appendage isn’t N’Zoth’s littlest tentacle, it has fully fleshed out plans for total world domination! If having a megalomaniacal tentacle at your service is good, then having one that also explodes into awful corrosive sludge is doubly fine! It may chafe to admit it, but this gross bit of disembodied anatomy may prove to be a timely ally.[1] 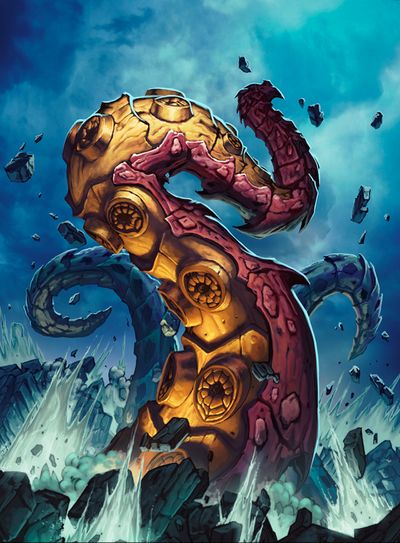