Team 5 (also known as Blizzard Team 5) is the Blizzard Entertainment development team responsible for Hearthstone. Beginning as a "small and nimble" team of 15 members for much of the game's original development, the team has since grown to more than 70 members.[1] Created specifically in order to develop Hearthstone,[2] Team 5 is responsible for all ongoing game design.[3]

For most of the game's original development, the team comprised only 15 "hard-core ninjas",[2][4][5][6] but by the game's mid-beta in November 2013 had begun to grow. The next few months saw the recruitment of several additional members,[7] and the team has continued to grow since then.[8] As of June 2015 the team numbered 44 members;[9] by January 2016 this had grown to "about 50 people".[10] As of September 2016 there are "70+" people on the team.[11][12][1] After roughly doubling in size each year since the game's launch, Ben Brode stated in January 2017 that he expects the team to continue to grow, becoming "significantly larger" over the next couple of years.[1]

Each member of the team as stated in the game's credits is depicted in their own credits card, shown during the credits reel.

The only public listings of Team 5's members are found in the game's credits, which are updated infrequently and often lack more recent additions to the team. It is not therefore possible to state with certainty the current size of Team 5 or to comprehensively list its members. Below are the latest official listings of Team 5, as stated in June 2015 in the game's credits, as well as some additional confirmed members.

Personnel titles are based on the latest known information, but due to infrequent official confirmation are potentially out of date. 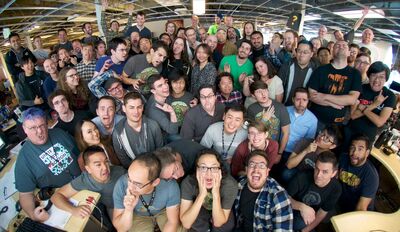 The following personnel are known to be working on Hearthstone, but their position as members of Team 5 has not yet been confirmed.

Team 5 is assisted in its role as primary designers of the game by various other Blizzard employees. For a full list see Credits (list). A few notable members perform a particularly significant role in the game's development, and are listed below. Some of these employees may be part of Team 5, but without official confirmation.

Team 5 itself breaks down into several more specific teams, many of which in turn contain sub-teams or groups, each dedicated to a specific area or phase of the production process.

In February 2017 Dean Ayala explained how the design team breaks down:

Design team is around 15 people now. Live Content (Brawls, Firesides, Other Events), Initial Design (Card Designs, Mechanic Designs, Set Flavor and Theme), System Design (Ranked Systems, Tons of Other Systems), Final Design (Set Tuning, Card Design, Mechanic Design), and Mission Design (Mission Design, Card Design). We also have Ben that directs the ship and another sort of jack of all trades designer than works a lot on new player experience, matchmaking, and flavor things. That said, well all help each other out quite a bit and the real list of things each individual person does is more like 20 bullet points rather than 2. That's the general jist though.[49]

Ayala explains that the majority of Team 5 members work primarily in other areas:

There are many other people of various disciplines like art, engineering, production, community, QA, customer support, marketing, business, etc that make an equally large impact on the game.[49]
UI has the difficult task of trying to make everyone's ideas work on PC/Tablet/Phone in addition to a bunch of other additional art tasks they get pulled into.[50]

For more information on the role each team plays in the design process, see Design and development of Hearthstone#Card creation. 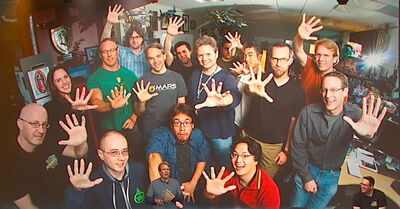 The original 15 members of Team 5, being presented at Blizzcon 2013 by Eric Dodds and Ben Brode

"There were all these new platforms emerging that people were playing on. We loved those platforms as well. We wanted to figure out if we could make a team who could jump in and do those type of games. That was the impetus for starting up this group called Team 5." - Jason Chayes[51]

Team 5 was created in 2008 specifically for the development of Hearthstone,[52] with the intention of taking a different approach to game creation than that previously taken by Blizzard in developing its games, with 50+ person teams and multi-year development cycles.[2] Team 5 was created with the intention of working on a smaller scale but at the same level of quality.[2] The mandate for the team was to keep the team very small, and to "think of ways to develop a game that might be non-traditional within Blizzard's walls".[2] The smaller team required its members to be "old-school" "garage programmers" and able to "wear a lot of different hats", with far less specialization than that typically found in larger teams.[2]

The initial composition of the team included long-time Blizzard veterans and "new blood brought in specifically to help [Blizzard] create a type of game the developer had never done before: a card collecting game."[51]

Team 5 was created in 2008,[52] but for a long time was a very small group of less than 15 members, mostly focusing on prototyping.[53] Full development appears to have started spring 2012.[54] Team 5 was first announced along with Hearthstone itself at PAX East in March 2013, by which time it had grown to 15 members.