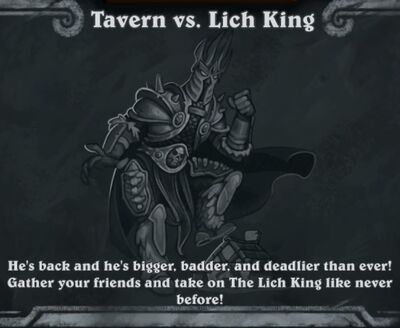 "He's back and he's bigger, badder. and deadlier than ever! Gather your friends and take on The Lich King like never before!"

Tavern vs. Lich King is the first ever raid and was accessed by players as a Fireside Brawl at Gamescom 2017's Fireside Gathering. It made its debut on August 22, 2017.

It could be accessed by all players at Fireside Gatherings in 2017 September.

During Gamescom 2017, Hearthstone players joined the biggest Fireside Gathering in order to defeat the Supreme Lich King, an AI boss with a maximum health pool of 999,999 HP, and the lowest being around 1,000 HP, but this is customizable by the Fireside Gathering's host (Innkeeper). 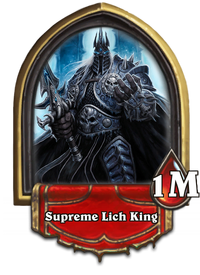 You simply have to deal as much damage as you can. The damage the Lich King takes is permanent. You can try to stay alive as long as possible and deal a large amount of burst at the end.