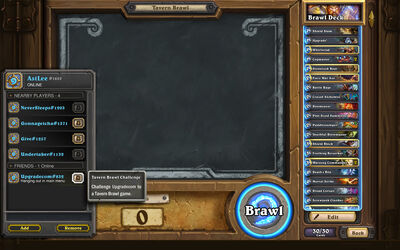 Tavern Brawl is one of Hearthstone's lighter game modes. A weekly event, a new Tavern Brawl begins each Wednesday (Thursday in Asian regions). See the schedule for this week's times.

Each Tavern Brawl presents a limited time opportunity to face other players in special matches with unique rules. These might be requiring players to use special pre-made decks, adding random cards or minions, or changing the very rules of ability activation or mana use. Some Tavern Brawls allow the player to construct special decks especially for the challenge from within the game mode itself, while others provide powerful premade decks, or entirely random decks, and some Brawls even see players take control of special heroes with their own Hero Powers. Some Brawls feature Tavern Brawl cards, special cards not playable normally, as well as boss cards from adventures such as One Night in Karazhan. Each week sees a fresh Tavern Brawl, with its own unique rules.

As well as being matched against other random opponents, players are able to challenge players on their friends list to a Tavern Brawl, as a special type of Friendly Challenge.[1]

An intentionally "fun" game mode, Tavern Brawls offer unique limited time experiences, with far less of a competitive focus than other game modes. This makes them good for quick matches, friendly games and cumulative wins. With many Brawls incorporating random card generation or minion summoning, winning a Tavern Brawl often involves a fair amount of luck, as well as the ability to adapt to and deal with the situation at hand. Tavern Brawls help to break up the focused rigours of Hearthstone's other game modes by providing a fresh twist on the game's rules each week.

Tavern Brawls are intended to be highly accessible, even for players without extensive card collections.[2] However, Tavern Brawls are not unlocked until the player reaches level 20 with at least one class (including Demon Hunter class which is level 20 after completing the prologue).

Each week, the Tavern Brawl is open for nearly the entire week, with only one hour of downtime, according to the following schedule by region:[3]

Converted to Coordinated Universal Time (UTC) the schedule is as follows:

While most weeks see a brand new Tavern Brawl, just under half are reprises of previous Brawls. Since each Brawl is only available for 7 days (originally 5), this allows players to enjoy old favourites again, and avoids Brawls becoming overly similar due to a desire to explore past mechanics. Most reprises are simple repeat outings, identical to the original Brawl, but some involve changes, such as fixing bugs or balance issues, or even adding in extra elements.

The following table lists Tavern Brawls that have appeared more than once, including brief notes of any known changes. 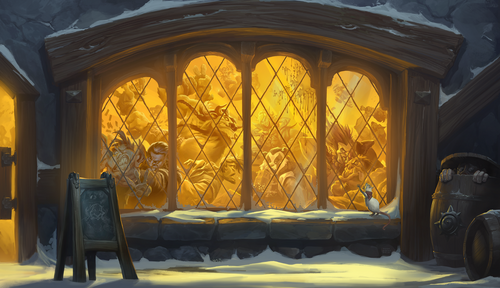 Tavern Brawl cards are special cards, heroes and Hero Powers only available to players when participating in a specific Tavern Brawl. These are usually provided through pre-made decks, although they may be granted to players directly during matches. Tavern Brawl cards usually match the theme of the Brawl, and often feature fun or outlandish powers not seen in regular cards.

Fireside Brawls are special Tavern Brawls that can only be played at Fireside Gatherings.

Each month there will be a different Fireside Brawl to try—check the Fireside Gatherings website to find out about the brawl that’s running this month. These special brawls run the whole month with no breaks, and they co-exist with the weekly Tavern Brawls.

The first Fireside Brawl that got a large amount of attention was Tavern vs. Lich King.

"I'm not exaggerating when I say that each week, people tell me that we've created the greatest brawl ever, at the same time that others are saying it's by far the worst." - Ben Brode[25]

As of October 2016, Tavern Brawls are primarily designed by Pat Nagle (the namesake of Nat Pagle) and Dan Emmons.[26] The two designers "sit in a room and brainstorm", with additional inspiration from the internet and other team members. The ideas are then playtested and iterated upon with the rest of Team 5.[27][28] Tim Erskine serves as producer for Tavern Brawl content.[29]

According to designers Emmons and Nagle, the most important goal of Tavern Brawls is to provide variety and freshness, "mixing up" the standard game experience of ladder or Arena play, and providing players a reason and reward for logging in regularly.[26] The "Surprise" of the new Brawl each week is also "really big" for the developers.[26]

The designers originally considered having a ranked ladder for Tavern Brawl mode, including a Legend rank.[30] However, they decided not to in order to avoid players feeling pressure to play, instead adopting a strong focus on "fun".[30] For example, the card pack reward for a single win provides a reward for trying each Brawl, without creating any sense of compulsion for players who didn't that week's Brawl. 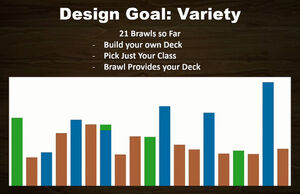 The Tavern Brawl mode is also designed to help with the game's accessibility. This is partly achieved through Brawls that don't require players to own a lot of cards, and also in the 'free' card pack reward each week, helping players to build their collections.[30]

Tavern Brawls allow for experimentation, and are sometime used to test or develop new mechanics, allowing the developers to observe player reactions. This time spent developing the required technology makes it relatively simple to then implement the mechanic elsewhere in the game.[31] Examples of this process include Discover. However, the developers balance the ease of experimentation with a desire to keep new mechanics fresh for players to discover in new sets. Ben Brode explains:

"There are pros and cons. The pros are obviously that we would get more confidence on balance. One of the cons is that part of the fun of card games is exploration. If we are putting it out there and a lot of it gets solved or figured out, then when we release a set it isn’t as crazy and exciting as it could be."[32]

The brevity of Brawls also frees the developers to experiment with a variety of designs, since "even if [the developers] make a really bad one" it will only last a few days.[26] This allows the designers to create Brawls that target specific groups of players, and take risks with their designs.[26]

The designers learned from early Brawls like Spiders, Spiders, EVERYWHERE! with decks composed solely of minions, incorporating a small number of random spells into later minion-focused Brawls such as ShiftCon.[30]

Tavern Brawls were being discussed by the developers prior to the launch of Hearthstone.[33] However, it was not until June 10, 2015, more than a year after the game's release, that the feature would be announced to players.

The Tavern Brawl system was added with Patch 2.7.0.9166 on June 15, but was not activated until June 17, when the first Tavern Brawl, Showdown at Blackrock Mountain, went live. In the interim period before the first Brawl, the as yet blank fourth button on the game box would begin to sparkle each time the player entered the main menu.

Captain Blackheart's Treasure was planned for release in October 2015, in order to debut the upcoming Discover mechanic.[27] However, technical problems prevented this, and the keyword was instead announced at BlizzCon 2015 with its accompanying adventure, The League of Explorers.

In December 2015, with disconnections and downtime in the Europe region coinciding with the release of the latest Tavern Brawl becoming a regular occurrence, Blizzard announced that they would be adding additional testing measures to help prevent this in the future.[24] Shortly afterwards it was announced that the release times for Tavern Brawls in each region would be changing: instead of debuting in the Europe region at 4pm UTC, followed by Americas at 6pm and other regions at 7pm, new Brawls would now debut in the Americas region at 5pm UTC, then in all other regions 9pm.[34][35]

In October 2016 Heroic Tavern Brawl was announced, marking a new hybridisation of the Tavern Brawl and Arena game modes. This was also the first known Brawl to use Standard format, rather than the usual Wild format. The first explicitly Standard format Brawl followed in December 2016 with Clockwork Card Dealer - Standard, a simple variant of the original Clockwork Card Dealer.

On July 1, 2019, a new schedule was implemented for Tavern Brawls, reducing the weekly downtime from roughly 2.25 days to a short time span of 1 hour.[3]