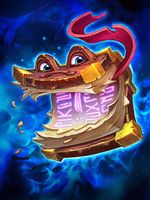 For background information and
guides on maintaining this article,
see Cards.

More than 2 of a kind[edit source]

Just finished playing a game right now and the other player had 5 of the same card, and there was no copy card being used, how is this possible and if not what is being done to fix this, I got knocked out a rank because of this game — Preceding unsigned comment added by 10:19, 28 February 2014‎ (talk • contribs) 76.2.169.84

If you're not talking about an arena match, it definitely shouldn't be (and otherwise isn't) possible. If you're sure no copying or generating cards were involved, you should report it on the bug report forums. -- Taohinton (talk) 18:49, 1 March 2014 (UTC)

I'm proposing a change to more intuitive naming for how we categorize non-collectible cards. The basic problem is that right now our term "uncollectible" doesn't seem to include cards that are literally uncollectible (for instance boss cards). I'd like to use a better term for this group of cards (for instance "Generated cards"); please see the thread I created at Talk:Uncollectible for more discussion. -Jerodast (talk) 20:01, 20 January 2015 (UTC)

There is a small error in the Equipment card small table where the weapons attacks and durability are switched cant seem to edit tables — Preceding unsigned comment added by SatoshiHP (talk • contribs) 18:15, 20 February 2016‎

Thanks for the heads up! After a bit of poking around I found the order the stats were being displayed in simply didn't match the table row template. Fixed. -- Taohinton (talk) 03:49, 3 March 2016 (UTC)