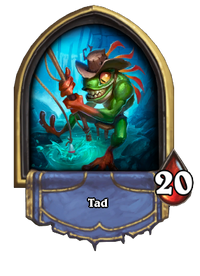 Tad is a boss that can be encountered during the Dungeon Run. 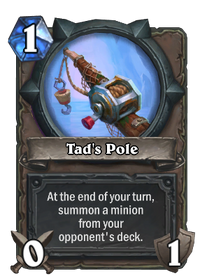 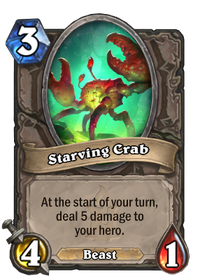 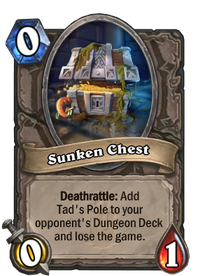 Tad has no hand, plays no cards, and will not draw anything, so he will not be subject to any fatigue damage. His Hero Power, although described as randomly pulling out a minion from his deck, actually pulls out a minion matching his current mana crystal count. Hence, the minions coming out of his deck are in a pre-determined order, and you can prepare your plays accordingly.

Order in which the minions are summoned:

If you manage to survive through ten turns of his minions without doing any damage to this boss, it will summon one last minion - a 0/1 Sunken Chest that causes Tad to immediately lose once it is destroyed. Breaking this Chest will also reward you with Tad's Pole, a 1-mana 0/1 weapon that summons minions from the opponent's deck. It is crucial that Tad does not take any damage if you want the Pole, so you have to be prepared to kill the Starving Crab at first opportunity. Tad's Pole will remain in your deck for the remainder of the run.

If you are not interested in getting the Tad's Pole, just try to quickly do most of the damage early while keeping the Starving Crab alive. Finish it off with spells because an earth elemental pops at the 5th turn. Because he plays no cards, you can easily use Sap or Mulch on his more troublesome minions without any downsides.

While all of Tad's minions appear to be standard Hearthstone cards, they are specifically made only to be used by him and can have various buggy interactions when stolen, including dying immediately on play or being untargetable by both the player and Tad if already on the board.

Tad is unique to Hearthstone.

Murlocs (known as gmmmlmrmrgmg or Mmmurlok in their language of Nerglish) are a bipedal, amphibious humanoid race mostly residing along coastlines, lakeshores, and riverbeds. They possess bulbous bodies, large mouths lined with rows of sharp fangs, clawed hands and feet, slime-coated skin, and can breathe underwater. Individuals range in coloration from turquoise to darkish grey, and while their heights vary from 3.5 ft. to 6 ft, they stand at an average of just 4 ft.