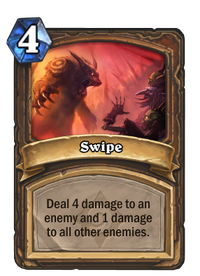 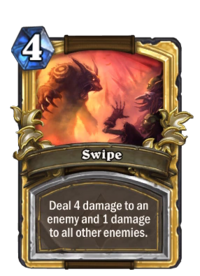 When a bear rears back and extends his arms, he's about to Swipe! ... or hug.

Swipe is a druid spell card, from the Basic set.

Two copies of Swipe are a reward for raising a druid to level 8.

Two Golden copies of Swipe are a reward for raising a druid to levels 47 and 48.

Swipe is uncraftable and cannot be crafted or disenchanted.

Swipe is a powerful single-target removal card that also acts as an AoE removal card for weaker or weakened minions.

It is also known for making druid extremely strong in the early game and a solid opponent against shamans (because of the fragile nature of the totems), priests (because of their weak early game) and murloc decks (because their health pool is very low).

Note that it affects all enemies, not just minions. This can make it useful for dealing a little extra damage to the enemy hero themselves, especially with some Spell Damage. It also provides you with the option of casting the spell on the enemy hero, which can be a desirable option for end-game nuking or when the spell's AoE damage is sufficient to destroy any minions. 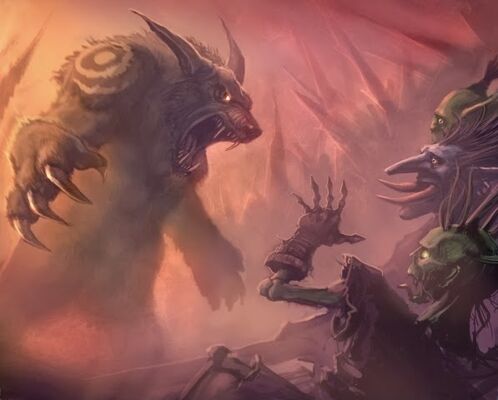